Written when Valencia was a third-year student, the paper, “Pride and Prejudice: Same-sex Marriage Legalization Announcements and LGBT Hate Crimes,” examines whether same-sex marriage legalization announcements impact the occurrence of LGBT hate-crimes. Co-authored with 2019 economics Ph.D. graduates Breyon Williams and Robert Pettis, the team’s research found that a same-sex marriage legalization announcement leads to a reduction in the LGBT hate-crime rate of 0.1 per 100,000 people.

“This paper is important because LGBT people are more likely to be the target of a hate-crime than any other individual minority group,” Valencia said. “We consider same-sex marriage laws because existing research suggests same-sex marriage legalization leads to greater tolerance of LGBT people. Further, the issue of same-sex marriage is one of the most salient social issues in recent U.S. politics. If such a notable issue has little impact on the LGBT hate-crimes, it is unlikely that other LGBT-specific policies impact such crimes.”

“Here they are analyzing different mechanisms that may lead to this particular unintended consequence,” Ozturk said. “For example, such legislation changes people’s perception of the acceptability of the LGBTQ lifestyle and their own beliefs and attitudes and changes how they behave.”

More directly, LGBT same-sex marriage legislation can lead to economic changes like shared health insurance or filing taxes jointly, though Valencia’s paper focuses on the hate crimes against LGBT individuals. Hate crimes themselves can have economic consequences, too, if someone is victimized and cannot work because of injury or prejudice. Economics are tied to everything in a sense, Ozturk said.

Once Valencia graduates with her Ph.D. in 2021, she wants to continue to work in academia, to “continue being an explorer and having the freedom to do the research I like.”

The memorial award was established by Moore School faculty in McInnes’ memory in 2017 and was given that year to former Ph.D. student Breyon Williams. Each award includes a $750 cash prize.

“The death of [McInnes] hit the economics department and the Moore School extremely hard,” said John McDermott, Moore School senior associate dean for research and academics and an economics professor who assisted in creating the McInnes award. “[McInnes] was a terrific economist, wonderful teacher and true friend to everyone in the department. She was smart, funny and kind. Her students loved her. When she died, we all wanted to dedicate a prize to her memory, one that involved her beloved Ph.D. students.”

Winning the award is also personal for Valencia, who worked with McInnes before she died.

“I feel so honored to win the Melayne Morgan McInnes Memorial Award, and I hope we make [McInnes] proud of us,” Valencia said. “She has been one of the most influential people I have met at the University of South Carolina. It is very hard to find correct words for her; she was just so exceptional as a person and as a researcher. Therefore, I am very privileged to win the Melayne Morgan McInnes award!” 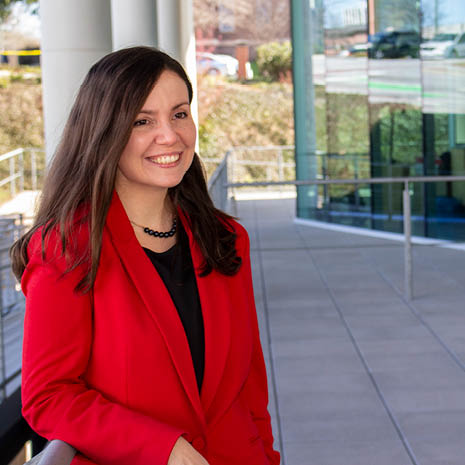 Moore School economics Ph.D. student Zehra Valencia and her team of researchers explored the impact of same-sex marriage legalization on lesbian, gay, bisexual and transgender hate crimes. They found there is a small reduction in hate crimes when same-sex marriage is legally recognized.

Connect with Zehra on LinkedIn