In Crime and Punishment, Dostoevsky writes, “To go wrong in one’s own way is better than to go right in someone else’s.” I came to college with a clear picture of what I wanted and how I would do it, but things quickly went “wrong.” After a year of Italian, I began studying Russian. I threw myself into linguistics classes, spent six semesters tutoring with the Student Success Center, a year as an Honors Ambassador and two years laying foundations in the UofSC Russian Club. These decisions were made with the counsel of my advisors, but they were mine. My experience at UofSC was fraught with twists and turns but led me to become the stronger person I am today.

Future plans: Jamie will begin her career with the FBI following graduation. She hopes to pursue a master’s degree in investigative and forensic psychology at the University of Liverpool. 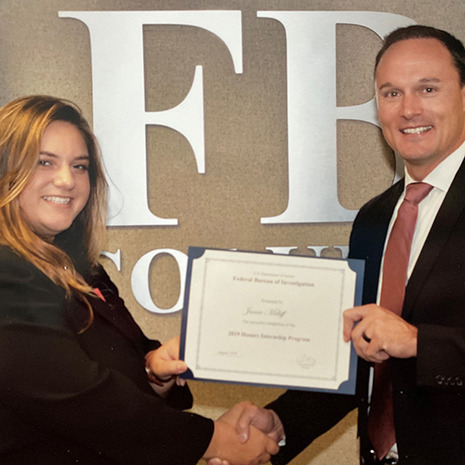 Jamie on her last day of her 2019 summer internship with the FBI.