On March 3, as many USC students are leaving Columbia for spring break, another, slightly younger, group gathers.

More than 600 high school students will attend the Southern Interscholastic Press Association (SIPA) convention to refine their media skills on a variety of topics, including broadcast, photography, design, writing, social media and reporting.  They will be taught by media professionals and journalism advisers, as well as alumni and professors from the School of Journalism and Mass Communications (SJMC).

SIPA and the South Carolina Scholastic Press Association (SCSPA) are two organizations housed in the SJMC which serve and support middle and high school media programs in South Carolina and the Southeast through educational conventions and conferences, evaluative services, scholarship opportunities and various individual competitions. Together, the two organizations bring more than 1,500 high school students and advisors to campus annually.

“Our school is proud to support important developmental media programs like SCSPA and SIPA, which inspire thousands of high school students to pursue careers in journalism and mass communications,” said Dr. Andrea Tanner, director of the School of Journalism and Mass Communications.  “I’ve found that many of our students have a passion for writing and reporting that is developed years before they enroll at the University of South Carolina.”

Leslie Dennis (BA 2007, MA 2014), director of both SIPA and SCSPA, agrees that this exposure to the people and facilities often helps push the best and brightest young journalists in the region toward joining the SJMC.

“The high school students get to see our great new building and the programs the J-school has, what the university as a whole has to offer and the skills they can learn here,” Dennis said.

And she should know. Dennis attended the conferences as a high school student, was named S.C. Scholastic Journalist of the Year in 2003, enrolled at Carolina and now leads the two organizations.

Approximately 10 percent of the school’s freshman class in Fall 2016 had been active participants in either one or both of the scholastic press organizations and many say being involved in scholastic journalism on the USC campus was helpful in making decisions about college and a major.

Freshman broadcast journalism major Summer Huechtker said her involvement in high school journalism and its conferences on campus inspired her and gave her the opportunity to talk with other students who had the same aspirations.

"SCSPA introduced me to the journalism program at USC and made my transition to USC so much easier because I had already seen their facilities and the work they do. SCSPA made me excited to come to USC because they showed me how they could help me reach my goals," Huechtker said.

Some of the J-school’s standout graduates who have followed the pipeline from SCSPA and SIPA to USC and into promising journalism and communications careers are:

Lauren Harper came to USC from SIPA expecting to major in broadcast journalism. Instead, she graduated with a public relations degree in 2016 and now works as Mayor Steve Benjamin’s adviser for policy and communications.

Christopher Rosa, a 2011 SCSPA Journalist of the Year and 2015 public relations graduate, now works as an entertainment staff writer for Glamour.

Amanda Loveday, a former SIPA president and USC broadcast graduate, is a senior project manager at NP Strategy, a strategic communications firm. “More than anything, I was a better student and journalist because of SIPA,” Loveday said.

SCSPA and SIPA students don’t all go on to be journalists or media professionals, but Dennis believes their experiences at conferences and conventions are vital to their education, regardless of their future careers.

Among those former students is Jarad Greene, a SIPA graduate (and PR minor '11) now pursuing a Master of Fine Arts in cartoon studies.

“I can see now that the time I spent writing and drawing under tight deadlines year after year was crucial to developing my creative process and work ethic,” Greene said. “I probably wouldn’t be where I am now without those former years on a newspaper staff.”

He echoed Greene’s sentiment about the usefulness of training as a journalist.

“When I look back at my life so far, I think being a journalism major is one of the wisest choices I’ve made,” he said. “It teaches you to ask questions, to organize thoughts and information and, above all, to communicate effectively. Those are all vital skills to have in life.” 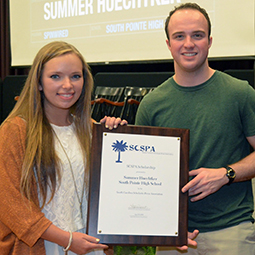 John Romanski, a sophomore broadcast journalism major, talks about his involvement  in scholastic organizations in high school. He won a Southeast Emmy Award for his work on The Buzz TV at Fort Mill High School for a public service announcement "Protect Your Brand."

More than 600 scholastic journalism students will be around campus for the 2017 SIPA Convention March 3-5.

Kyle Tibbs Jones author of The Bitter Southerner will be the keynote speaker.

SIPA is sponsoring a new campaign leading up to SIPA 2017, drawing from The Bitter Southerner’s mission.

#MySouthCampaign wants to hear from students about their own Southern communities: how they define them and what they want from them in the future.