Janet and Tal: A tradition of giving

When visual communications professor Van Kornegay returned from his 2013 service-learning Maymester class in Malawi, he created an album of his students’ work for Janet Tarbox and Tal LeGrand, the couple whose scholarship donations helped make the trip possible.

The book would become one of Tarbox’s most treasured possessions, a reminder of the strides the students made as photographers and of the work they did with the country’s orphans. But it was the last photograph in the album that resonated with her the most: a shot of the group’s tents, lights glowing within, set against a vast and starry sky.

“That photograph conveys to me the essence of that trip,” Tarbox says. “Here they all were, this little cluster of people in this great big world. They were providing light to one another. What the students did with the people there mattered. Every encounter mattered. And that went both ways.”

Supporting things that mattered, particularly those within the School of Journalism and Mass Communications, was a part of life for Janet and Tal. But the story of how two people who never attended the school became some of its most ardent supporters is one that spans two marriages, three deaths and more than 40 years.

Janet and Tal met at their church, Trinity Cathedral in Columbia. She was an alumna of the University of South Carolina, having graduated with a bachelor’s degree in sociology and a Master of Education. Tal had attended the university after returning from World War II, but was unable to finish his degree because he needed to work.

Each brought with them a good deal of backstory when they married in 1990. Janet had recently gone through a divorce and was embarking on a second career as an Episcopal priest. Tal had lost his first wife, Charlotte, to multiple myeloma in 1987 after nearly 40 years of marriage.

It was his first marriage that inspired their tradition of giving. Charlotte was the daughter of George Buchanan, better known as “Dean Buck,” who led the J-school from 1956-1965. Janet says Dean Buck was “exceedingly good” to Tal, and that kindness fostered a special connection between the two.

“When Tal came back from World War II, he was a young married man and didn’t have a career path,” Janet says.

It was a favor that changed the course of his life. After that, Janet says, “Tal always felt a bond with him.”

A scholarship fund was established in Dean Buck’s honor after his death in 1975, but little happened with it until Tal and Janet got married and decided to build up the fund. Though their annual contributions were modest, their persistence paid off. In 2011, Tal signed the paperwork to officially endow the George A. Buchanan and Charlotte Buchanan LeGrand Endowed Scholarship, allowing it to be awarded in perpetuity.

The scholarship was only the beginning. In 2013, the couple donated five $1,000 student travel scholarships for the J-school’s Malawi Maymester trip.

Why Malawi? It was the trip’s visual communications focus that piqued Janet’s interest.

“I’ve always been an amateur photographer,” Janet says. “And that Malawi trip involved photography and hauling a printer into one of the deepest corners of Africa. I was very intrigued by that.”

When Tal saw how excited his wife was, the decision was clear.

After the Malawi gift, Tal asked Janet if they could start another scholarship and name it after her. But she insisted that they continue to focus their giving on Dean Buck’s fund instead. It wasn’t until Tal passed away from ALS in September of 2016 at age 89 that Janet reconsidered his request, but with a twist.

“He loved it when I was out making pictures. When he would take the dogs out for a walk, if he saw something he thought I would like, he would walk all the way home and come and get me and say ‘You’ve got to see this! Get your camera! You’ve got to see this,’” Janet says, laughing. “He was very involved in what I loved to do, and I really wanted to honor him in this.”

Naming it after him just made sense.

The Talmadge Moore LeGrand Photojournalism Scholarship Fund, established last year, provides J-school students with the support needed to become professional-level photojournalists by funding educational opportunities beyond what the school could previously offer. Last month, students in Professor Denise McGill’s Long-Form Photo Story class traveled to Athens, Georgia, to attend a special workshop put on by top professionals at the National Press Photographers Association headquarters. Later this semester, her students will participate in a workshop where they will document a small town for a weekend, coached one-on-one by industry experts. The best projects from the class will be entered into national photojournalism contests.

“This fills an important niche in our curriculum,” says Associate Professor McGill. “We have talented students with a passion for visual journalism. These funds allow them to immerse themselves in their stories, while getting feedback from some of the great minds in the field. It will be a transformative experience for them and a foundation for the rest of their careers.”

Janet’s hope is that students will learn to tell stories with their work.

“I want to help students be able to slow down and think about what they’re doing and what they want the photograph to do or to say, rather than just being a documentary photographer or making a snapshot in a hurried moment,” says Janet. “It’s about providing them with the time and the space to develop their skills and to discover the art.” 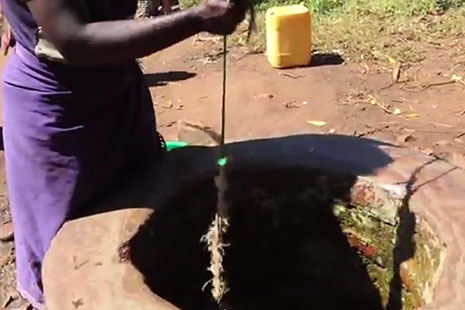 USC student video about a village water source results in enough funds being raised to repair the well.

Students travel to Africa to help a little, learn a lot