Two advertising majors from the School of Journalism and Mass Communications took home the top prize in a national case competition, earning a combined $10,000 in scholarship funds.

Noah McGill and Suzanne Green won first place in the Washington Media Scholars Media Plan Case Competition on June 13 at the Newseum in Washington, D.C. Green is a May alumna, and McGill will graduate in December.

SJMC assistant professor Linwan Wu joined the team in Washington. As their faculty advisor, he helped them prepare for their presentation in front of the judges.

“They have shown their talent in media planning and have been working really hard for this competition,” Wu says. “They really impressed the judges with their great media plan, innovative idea and comprehensive data analysis. I believe they have a bright future in the media industry.”

Founded by SJMC alumnus Robin Roberts, '76, the Washington Media Scholars Foundation supports students who are interested in careers in the public policy advertising industry. The is the second consecutive year that South Carolina has won the case competition — advertising major Allyssa Andrews was part of the winning team in 2018.

Working in teams of two, the contest challenges students to create a strategic media plan based on a hypothetical referendum campaign. Participants must evaluate real world, consumer-driven data to determine the best media mix needed to influence political decision makers and their constituents.

McGill and Green were among the 12 finalists from seven universities to participate in the final round of competition and Media Scholars Week. Throughout the week, the scholars had the opportunity to network with top executives in the public affairs and media industries, visit more than 15 media and public policy organizations, and present their plans to a panel of five judges from the industry.

"The amount of support throughout this whole process has been overwhelming," McGill says. "Dr. Linwan Wu believed in us and mentored us. Robin Roberts and the Washington Media Scholars Foundation gave an enormous amount of opportunity to us. I'm grateful for everyone, from Columbia to Washington, who has invested in our careers."

Tom Reichert, dean of the College of Information and Communications, was also there to cheer on the team. Several other SJMC faculty members and students have garnered national awards this year, including the Bateman team, and Reichert says all of these recognitions underscore the school’s commitment to fostering excellence.

“Winning national student competitions speaks to the caliber of students, faculty and staff support here at South Carolina,” he says. “No other program does as much to ensure student success.”

In addition to the case competition, students can also apply for scholarships through the foundation's Media Fellows Program, which distributes $75,000 in 50 scholarships annually. This essay-based scholarship program is open to rising juniors and seniors pursuing degrees related to public policy and media strategy with demonstrated financial need. The 2019 Media Fellows scholarship application deadlines are July 12 and November 15. Visit the WMSF website to learn more and apply. 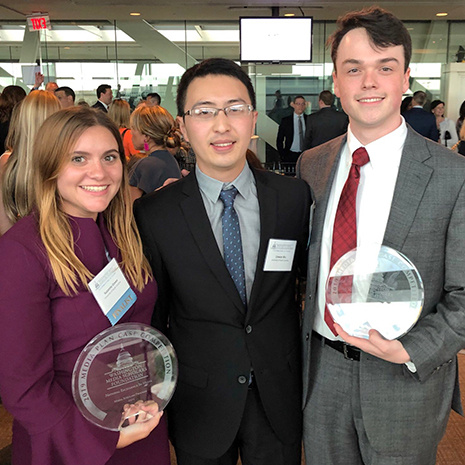