When taking a course with the university's first African American full professor, who is still teaching at the university today, students encounter what is known as "the McFadden experience."

Johnnie McFadden was hired as a full professor in 1979 and currently teaches in the department of neuropsychiatry and behavioral sciences at UofSC's School of Medicine.

"He's genuinely interested in making a genuine human connection with you," Michael Walsh, a clinical assistant professor who co-teaches a class with McFadden, said. "'The McFadden experience' is what the students talk about ... It's genuinely something that sticks with students many, many years after they experience it."

McFadden's 62-year career began in 1958 in Statesville, North Carolina. He was a public educator for two years before working as a junior high teacher in Wilmington, North Carolina, for six years.

From 1966 to 1970, while schools were being desegregated, he taught for the Charlotte-Mecklenburg school district.

"All-white students, all-white faculty, all-white administrators, all-white parents," McFadden said. "But they were a desegregated school ... and they wanted me to be a part of that because they'd heard about my record in Wilmington."

Associate dean for diversity, interdisciplinary programs and social sciences Tracey Weldon has known McFadden and his family since she was a child.

"They've always been mentors of mine," Weldon said. "It was, you know, an opportunity for me to actually see what a professor looks like and to know that there are African Americans who do that work. In many ways, I've followed in his footsteps."

McFadden came to UofSC to pursue a program that allowed staff to get doctorates in different fields. Through the South Carolina School Desegregation Center's program, he became a staff member and a doctoral student at the same time.

After completing his doctor of philosophy, he was hired as an assistant professor in 1973. Despite the divided racial climate, McFadden said UofSC's atmosphere was generally tolerant.

"There was an atmosphere of acceptance, but selectively so," McFadden said. "The reason why I say that is because the people that I worked with were friends of mine who came down here from Chapel Hill, and we all knew each other. So, that situation, black-white relationship, was one which was easy to merge because we were all aiming toward a better society." 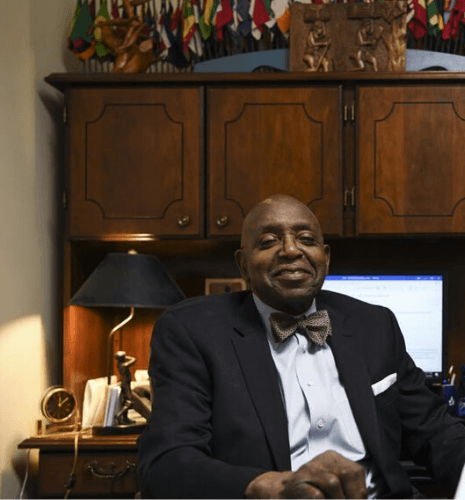 The Grace Jordan McFadden Professors Program is directed by Dr. John McFadden.  The program was created in 1997 to address the underrepresentation of minorities in the professoriate. Originally focused on science, technology, engineering and mathematics (STEM), the program has since expanded to include other underrepresented scholars from across multiple disciplines including the arts, humanities, education, social sciences, library science and business.