In a normal year, student-athletes on the University of South Carolina football team perform juggling acts every day.

Awake before dawn, football practice until lunch, classes in the afternoon, study sessions into the evenings. That schedule is repeated every day during much of the year, with only short breaks during the summer and winter.

It’s a rigorous schedule, balancing a full academic load with a physically and mentally demanding sport. Add in a year of COVID-19, with protocols and testing and uncertainty, and the task gets even more difficult.

Still, the discipline learned from years of perfecting their athletic craft — paired with academic advisors, tutors and mentors — helps prepare students for the schedules and rigors of college academics.

Overall, the university’s Athletics Department concluded the Spring 2021 semester with a grade point average of 3.369, its third-highest GPA in history and the 29th consecutive semester with a departmental GPA above 3.0. During the spring semester, 16 of 18 teams earned a GPA of 3.0 or better, including football, with a 3.02 GPA.  In Fall 2020, South Carolina had 115 student-athletes across five sports make SEC Academic Honor Roll, marking the 13th time in the last 15 years that the Gamecocks led the way in fall honor roll members.

Here’s a look at four student-athletes who excel in the classroom as well as on the football field.

I love the busy schedule. I like that it keeps me disciplined and makes me get my work done.

Trey Adkins says he always knew he’d be a Gamecock.

“My dad went to Carolina. Going into senior year of high school, I knew I wanted to go to Carolina,” he says. “Whether it was for football or just as a student, I was coming to Carolina regardless.”

The wide receiver from Simpsonville arrived on campus in August 2018. He didn’t attend summer practice and didn’t know if there was a place for him on the football team. Then he got a call telling him to schedule a physical so he would be ready to play. He spent the next two years as a walk-on receiver. This past summer, he earned a scholarship.

“Sports have been my entire life. My family is big in sports, too,” he says. “I played football, basketball, baseball, karate, ran track, men’s volleyball.”

He also excels in the classroom, graduating near the top of his class with a 4.6 GPA in high school, and arriving at UofSC with 22 credit hours from Advanced Placement and dual-enrollment classes. At South Carolina, his GPA is a 3.68, which he has earned while keeping up with a challenging athletic schedule.

Adkins started college as an exercise science major, thinking he might want to be a sports physician. He switched paths to sports management with a minor in business and is on schedule to earn his bachelor’s degree in December. Since he will still have football eligibility left after graduating, he plans to earn a master’s in sport and entertainment management — hoping to pursue a career in sports operations, facilities management or coaching.

And he’s never regretted his decision to attend South Carolina.

“I love the campus, I love the classes, I love football,” he says. “It was the best decision I ever made.”

I always had my parents on me growing up, so being disciplined came easier to me.

There was a set GPA that student-athletes needed to earn in order to participate in sports at Jovaughn Gwyn’s high school — and then there were the grades his parents required.

“My parents have always been big on me keeping up with my education. Even if I was eligible to play, they’d threaten to pull me out of practice if I didn’t have As and Bs,” he says.

Now a redshirt junior offensive lineman, Gwyn is a two-year Gamecock starter at right guard and a candidate for all-SEC football honors. He also makes the grades in the classroom — with a 3.4 GPA and a spot on the SEC Academic Honor Roll.

When he was recruited to South Carolina out of Harding University High in Charlotte, Gwyn says the adjustment to football and schoolwork was a difficult one.

“In high school, you have school and practice and then you go home. Here, you wake up at 5:30, practice, watch film, go to mandatory study hall and then classes. Some days I wasn’t home until 9:30 or 10 o’clock. I didn’t get to have any downtime,” he says. “It’s tough, but it depends on how you go about it. I always had my parents on me growing up, so being disciplined came easier to me.”

That attention to academics has continued to serve Gwyn well at South Carolina, where he is majoring in information science in the College of Information and Communications, with a minor in business administration. He expects to earn his Bachelor of Science degree in May 2022. He will still have football eligibility after that, so he is considering pursing a master’s degree.

He has taken advantage of academic advisors and mentors and study sessions at the Dodie Academic Enrichment Center.

“In high school, I think I only wrote one paper. Coming into college, I’d have a five-page paper due every week. Then 10 pages. Then 15 pages. At first it was difficult,” he says. “But our academic advisers at the Dodie, they make sure you stay on top of things. I had mandatory study hall freshman year. After first year, you can meet with an academic coach, and then you have tutors if you need them. They know I’m on top of  my stuff now.”

After his playing days at South Carolina are complete, he hopes to play professional football. He also is interested in a career as a trainer or running his own gym.

I redshirted and finally got in some more playing time. I did my school right and eventually earned a scholarship and here I am.

Spencer Eason-Riddle will finish his football playing days at South Carolina with his undergraduate and master’s degrees in public health — thanks to discipline, hard work, excellent academic advisers and a packed schedule.

“I have a dry erase board with all my homework, my whole schedule for the next two weeks. I need to make sure I’m on top of it, especially during the season, because it comes up on you fast,” he says. “There are certain weeks when, on Sunday, you think, ‘Wow, we have A&M on Saturday, but I have three tests, four homework assignments and an essay.’ You need to be disciplined and organized.”

Along with the schoolwork, he’s also heavily involved in community service, spending his Fridays with other Gamecock athletes at the Prisma Health Children’s Hospital as part of the Sandstorm Buddy community service program he organized. Along with being an SEC academic honor roll member, he also is on the SEC community service team and earned the 2021 SEC Brad Davis Community Service Award.

He graduated early, earning his BS in public health in 3.5 years. He later earned his master’s degree in health administration. This semester, since he still has football eligibility, he’s back in the classroom, taking additional courses.

“Trying to graduate early is difficult, but I’ve had the best academic advisers who work with football players, and the best compliance staff I could ask for,” he says. “They set me up with tutors and anything I needed to help excel in the classroom and work around the busy schedule of workouts and practices and games.”

It was especially daunting in graduate school, where his program required him to be a graduate assistant at a health care organization. During that time, he was at football practice from about 6:30 a.m. until 11:30 a.m., then worked as a GA from 1-4 p.m., then night classes until 8:30 p.m. On Friday, he would visit the children’s hospital or travel with the team and do homework in the hotel. He earned a 3.4 GPA as an undergraduate and a 3.7 in his master’s program. After his football playing days, he is considering using his public health degrees for a job in medical sales, hospital analytics or supply chain management.

Eason-Riddle didn’t have any scholarship offers when he graduated from high school in Raleigh, North Carolina, but the University of South Carolina offered him a spot as a preferred walk-on. He took the opportunity and he earned a spot on the team.

“I redshirted and finally got in some more playing time. I did my school right and eventually earned a scholarship and here I am,” he says. “I never intended to come here, but I couldn’t ask for anything better. The people and the atmosphere here, the love that the state has for the University of South Carolina. So many people, when they come here and they are not from Columbia, they stay here. There’s a reason for that. It’s been an amazing experience.”

After your sophomore year, they’re not on you that much. They give you a little bit of freedom.

Tyreek Johnson, a defensive end from Sumter, South Carolina, says football made him a better student.

“I try to do things on time and try to do everything the right way,” says the redshirt junior who earned his degree in integrated information technology in the College of Engineering and Computing in August.

It’s hard to argue with the results. Johnson has a 3.6 GPA, including earning a perfect 4.0 in Fall 2020. He will continue to take courses this fall and plans to start on his master’s degree in the spring.

He says one of the keys to his success is strategizing his schedule by taking some of the more difficult classes and labs in the spring semester and during the summer. Still, managing his schedule in the fall can be challenging.

“Some days, I’d have an assignment due on a Saturday night. We’ll be away at a game and at a hotel. You’re mainly focusing on football. I would have to finish the assignment when I got back to the hotel after the game. It would be late,” he says.

He says the opportunity to get a good education is part of what drew him to the University of South Carolina. He has had multiple family members graduate from UofSC, including a sister who was in the nursing program.

Johnson, who has built his own personal computer, says he was always interested in technology. And the tutors and mentors on campus have helped him along the way.

“When you first come to college, it’s mandatory. You’ve got to go to the Dodie, even if you don’t want to. After my first two semesters, I was still going to the Dodie for certain classes. I had this econ class, and I was struggling. I ended up getting a tutor and ended up with a B,” he says. “After your sophomore year, they’re not on you that much. They give you a little bit of freedom.” 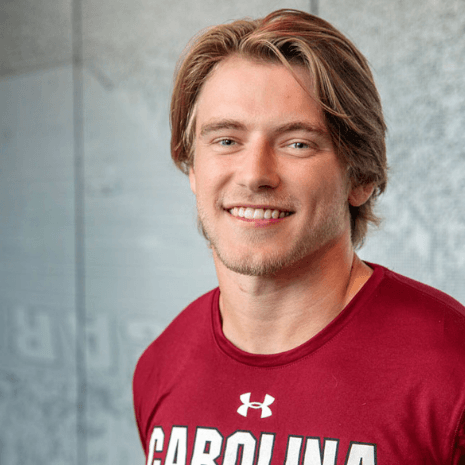 Trey Adkins started his football career as a walk-on and was awarded a scholarship this past summer. He will earn his bachelor’s degree in December in sport management and plans to pursue a master’s degree. 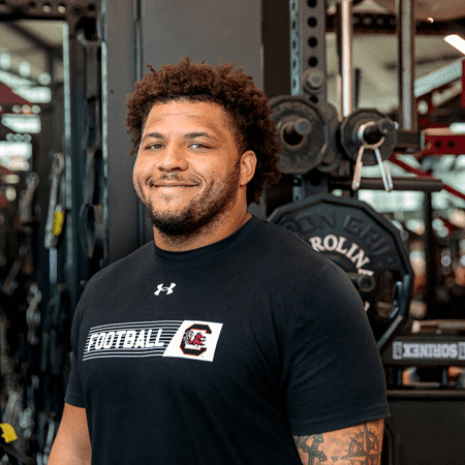 Jovaughn Gwyn is a two-year Gamecock starter at right guard and a candidate for all-SEC football honors. He also has a 3.4 GPA as an information science major and has earned a spot on the SEC Academic Honor Roll. 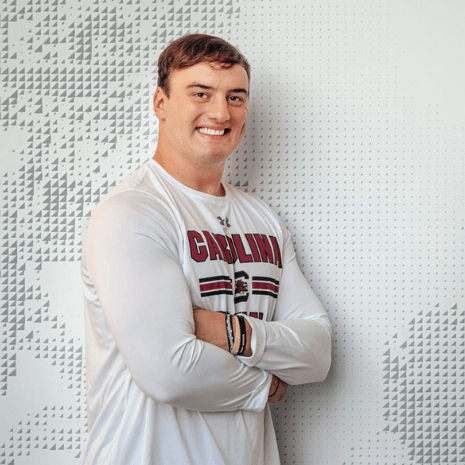 Spencer Eason-Riddle will finish his football playing days at South Carolina with his undergraduate and master’s degrees in public health. He also earned the 2021 SEC Brad Davis Community Service Award. 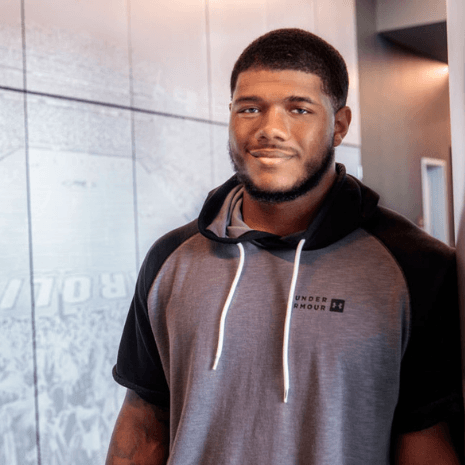 Tyreek Johnson earned his degree in integrated information technology in the College of Engineering and Computing in August, with a 3.6 GPA. He will continue to take courses this fall and plans to start on his master’s degree in the spring.