A Q&A with the program's director, John McFadden

The communications team in the Office of the Provost sat down with John McFadden to discuss the impact of the Grace Jordan McFadden Professors Program that he directs. The program helps prepare underrepresented minority students pursuing their graduate studies at the University of South Carolina to eventually become professors. This year, the program increased its yearly stipend for students from $6,000 to $10,000 and increased the total number of students it accepts from 20 to 30. These changes were possible because of funds made available through the university’s strategic plan.

What were the original goals of the Grace Jordan McFadden Professors Program when you helped found it in 1997?

Ultimately, we wanted to make a difference in terms of helping to fine-tune and retain African American scholars in the state of South Carolina. Because there was such a lack of representation in our state, we wanted to make a contribution in that regard. So, the purpose was to find a program that would help to organize, educate, train, and mentor students who would ultimately enter into the professorship. Many of them have done just that, too.

Well, we try to offer them opportunities in addition to their classes, graduate studies and classes in doctoral studies. We try to offer them seminars which happen at least on a monthly basis in a variety of topics that challenge their thinking and that challenge their way of life. We offer them, of course, opportunities for travel. Opportunities, for example, for publishing and writing. And by so doing, we help to stabilize their pathways in terms of academe and their career path in terms of just making a difference. And that's what we’ve always really wanted to see.

It’s easy for me to say that we absolutely need diversity in higher education, and I think it's easy for a lot of people to say that. But why is it important that there are more professors of color, more faculty of color, in universities such as the University of South Carolina?

Well, it's vital because the university is supposed to represent who we are as a nation. Who we are as a world. Who we are as a populous in terms of making a difference. I cannot overemphasize the vital significance of those individuals who come through here and have a chance to become a part of the Grace Jordan McFadden Professors Program and others like it. We help equip these future leaders with the academic, scholarly, political, and social tools that will help them to stylistically write, speak, verbalize and make a great difference. We are extraordinarily proud of those who come in, our graduates, individuals who have come in, who do their work, and who graduate and have a chance to hood at commencement time.

This program is special to me because of the emotions that it generates; because of the history that it’s put into place, and the legacy that I'm able to help perpetuate through it.

Our program has even started formalizing the beginnings of an alumni association. We have graduates who have become deans of business schools, like at Benedict College. Presidents of universities, like Tuskegee University, and Long Island University’s vice president. Individuals who have gone their separate ways in Oklahoma, and even abroad, to countries like Japan and Germany. Our graduates carry what they learn and what we teach here, wherever they go. In so doing, they also carry hail thee Carolina, forever to thee, to institutions and countries across the world.

The stipend was just increased for the program. Why is it more important now than ever that we get students into this program and that programs like this exist?

We have a whole world of individuals out there who would, could and should have a chance for this higher education opportunity. Who can make a difference, but either they have not had the intellectual challenges, the financial support, or the welcoming doors to bring them into the system and to help them to understand what the higher education system offers them. And I use the word system for a reason. Even you and I represent systems that sometimes don't allow individuals to get into the door. And what people are crying for is to try to see where they can make a difference. And the difference can be made by their coming to an institution.

But tuition has to be paid, books have to be purchased, lab fees have to be paid. And so, how does that happen? It happens through programs like this offering financial support, in addition to mentoring, so that individuals can afford to enter this system. It's vitally important, that even though this program only started with small funds, most recently $6,000 per academic year per student, now it's been increased to $10,000 per year per student. That's very, very significant, because it's allowing us to now put up the welcome mat and be able to say things to the world like, we want you and we have an opportunity to help support you. In addition to the scholarly things we can offer you, we can also offer you money to buy food, to buy gas, to ride the bus and to buy the books and things like that.

This program is named after your late-wife, and so many years after its founding, you're still the director of it. What is it about this program that makes it so special to you?

And then of course, when President Pastides and the board decided a few years ago to change the name from the African American Professors Program to the Grace Jordan McFadden Professors Program, that of course resonated with me. Obviously because of the name and the history, which she herself established on the grounds around here that she walked, in the classrooms that she lectured in and the images that she made — such an impact and a difference globally and nationally.

Whether I'm working as a volunteer, as a consultant, as a visiting scholar, as a professor, as a learner, or as a teacher, I want to be able to continue this path as long as God will have me to do so. Because all of this does make a difference and I feel like the spirit within me brings me to this point and this place at this time in my life. 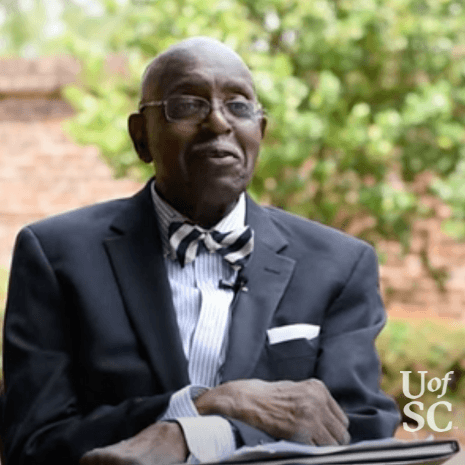