When Tyler Bankhead applied to be a peer leader for University 101, he never thought it would open up an opportunity for him to work at Bank of America. However, about a year later, he had secured an internship that put him in the Wholesale Credit Department at Bank of America Merrill Lynch.

The fourth-year finance and global supply chain and operations management student co-instructed a University 101 class with Georgia Doran, the director of the Office of Career Management (OCM) at the Darla Moore School of Business, who really took the Virginia native under her wing.

“I call Ms. Georgia my South Carolina mom,” he said. “She really pushed me and encouraged me not to settle on an internship until I got the offer I really wanted.”

The way Bankhead puts it, a finance internship is basically a 10-week job interview.  Many people hired in the finance world have done an internship with the company that hires them because that company is guaranteed that those graduates have the skills necessary for the job. As finance recruiting is on the lower side in South Carolina, Bankhead’s relationship with OCM became even more crucial. Doran was able to leverage the relationship OCM already had with Bank of America to connect Bankhead to this internship.

“I got to do my interview in OCM and sleep in my own bed the night before,” he said. “There were several South Carolina alumni who were interviewing me who I got to network with beforehand. I had a good understanding of what I was getting myself into.”

Beyond OCM, the Moore School classes Bankhead has taken have laid a good foundation for the work he did in his internship.  He found what he learned in James Austin’s financial statement analysis class to be particularly useful; Austin teaches from a real-world understanding and shows students what to expect in a finance position.

“If I hadn’t gone through that class, I would be drowning right now,” he said.

He has also been drawing on what he learned from a banking seminar hosted by the Carolina Finance and Investment Association, a student organization that brings in speakers to give students practical finance knowledge.

The atmosphere at Bank of America has given him a better understanding of the type of workplace he’s likely to be a part of in his future career and what his responsibilities could look like. He really likes that the company lets its interns take ownership of their work.

“I’m actually taking work off the plates of other analysts and allowing them to do their work better,” he said.

A key idea Bankhead has taken away from this whole process — from meeting Doran to working in his internship — is not to overlook the value of the people who are looking out for you.

“I can honestly say that I wouldn’t be where I am today if it weren’t for Colin Jones, who runs the CFIA, and Georgia Doran believing in me and encouraging me to see the potential that I didn’t see in myself,” he said. 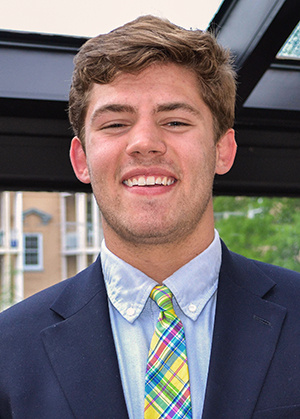 Bankhead secured an internship at Bank of America through the Office of Career Management (OCM).