Moore School offers a smooth transition from military to business

Brian Kinnally, a Professional MBA student, realized toward the end of his seven years in the military that he wanted to get an MBA. The University of San Diego business school alumnus went from California to Washington to Afghanistan before ending up at South Carolina’s Fort Jackson two years ago. The reputation and proximity of the University of South Carolina’s Darla Moore School of Business made it the perfect fit.

“I knew I was getting out of the Army and wanted to go to grad school,” he said. “Since I lived here and this is a great school, I decided to come here.”

Austin Vurpillat, an International MBA student, came to the Moore School for his international business and finance undergraduate degree and decided in his third year of the military that he wanted to return for his MBA.

“I knew I wanted to get back into international business, which is what I got my undergraduate degree in,” he said. “I love traveling and I love interacting with other cultures, so coming back just seemed like the obvious choice.”

In his time in the Army, Kinnally became accustomed to all the Army lingo. Now, as a graduate student, he’s relearning business lingo as he specializes in finance and works toward a certificate in business analytics. Vurpillat is also looking to return to what he knows by studying business development or finance.

Both have found the transition from the military to their respective programs to be surprisingly easy. While their classes are certainly challenging, both are grateful they don’t have to get up for 5 a.m. physical training anymore.

“I have so much time right now,” Kinnally said. “I’m able to manage schoolwork effectively and at the same time do my job search. It’s great — I’m having a great time.”

Vurpillat also mentioned that there is a distinct difference between hard work in the military and hard work at the Moore School.

“Here, you have air conditioning,” he said. “It’s comfortable.”

He has found that his experiences as a fire support officer and operations officer are helping him work well in groups.

“It’s easy to lead teams now,” he said. “It’s surprising how easily those skills in the military transition to the business world, as long as you think of it the right way.”

Overall, the transition from the Army back to school has been an interesting one for both students. For Kinnally, as he was part of ROTC in college and joined the military right after graduation, he hasn’t had much need for business attire or “civilian clothing” in general. He and his wife are in the process of building his wardrobe.

“I’ve been kind of feeling out how I want to be as a civilian,” he said. “I don’t know what works for me yet, but I’m just experimenting. It’s a really fun experience.”

After completing the program, Vurpillat is looking to stay a little closer, however, by working to bring direct investment to the state in either the South Carolina or Texas state houses. On the other hand, his love for travel could take him to the other end of the spectrum and have him helping American companies expand to overseas markets.

Kinnally hopes to find a job as a general manager for a large company. He and his wife plan to move back to San Diego to be closer to family. 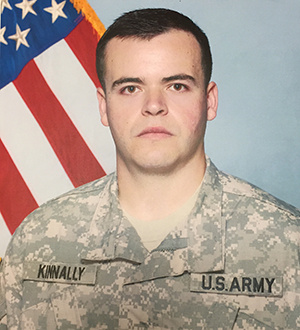 Kinally is in the Professional MBA program. 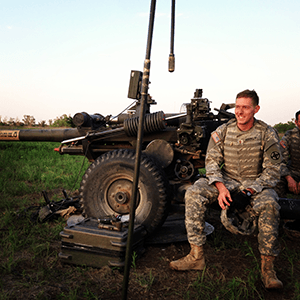 Vurpillat is in the International MBA program.