“This project gave me real-world experience that you would not get normally,” he said. “You’re not just running an analysis. You’re running an analysis that actually matters and actually has some sort of effect on what people are going to be doing in athletic departments.”

In June, he got to present his team’s research on attendance at football, men’s basketball and women’s basketball games to top-level administrators from the NCAA during the National Association of Collegiate Directors of Athletics conference in Dallas. The opportunity to get his research in front of the NCAA and other collegiate sports organizations is what first caught Derrig’s attention.

“Being a sports and entertainment minor, the NCAA connection was what really piqued my interest,” he said. “I have a lot of experience in general marketing, but getting sports-related market research experience is something I was also interested in doing.”

This project was conducted through the Moore School’s Center for Marketing Solutions. Through this center, students have had the opportunities to work on projects for ESPN, FedEx, Sonoco Products Company, and many more.

“We are committed to finding experiential learning opportunities and integrating them into the classroom,” said Jeff Rehling, director of the Center for Marketing Solutions. “This is another partnership in our effort to provide a balance of both academic and practical experience for each of our marketing students.”

The research project was based on responses to a survey about why students attend certain games over others, why they might leave a game early and what would make them stay longer. The survey — created by Derrig and nine other students as part of a marketing independent study class — was sent out to students at 140 universities.

After the data was gathered, Derrig and research team members Allie Whitley, Mary Lynn Barilla and Meghan Bush examined the 15,555 results based on various groupings, such as fraternity and sorority membership or gender. One commonality they found across groupings is that superstitions, such as leaving a game early, are a big motivator for students attending games and staying the whole time. This confirmed what Derrig, an avid sports fan, already thought about leaving games early.

“I know for me personally, I never leave a game early because, every time I have, my team has lost,” he said.

Many UofSC students held the same superstition, and some would do things such as wear the colors that their team would be wearing for a specific game, touch a certain Cockaboose while tailgating or even wear lucky underwear.

Presenting was one of Derrig’s favorite parts of the research project. It was his first time going in Texas.

“Probably my favorite part was actually traveling to Dallas and being able to present to about 450 people,” he said. “It was different than in college when you present projects to maybe 50 people for a class.”

The experience Derrig received from doing this real-life research has proved invaluable. He hopes to do more sports-related market research in the future and credits what he learned through the project with qualifying him for his current job as a project manager at Lightspeed GMI, a market research firm in New Jersey.

“If it wasn’t for this project, I wouldn’t have had the credentials to even apply for the job that I have right now,” he said. 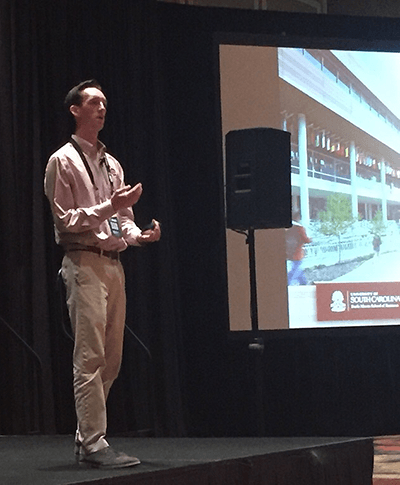 Derrig presenting his analysis at the NACDA conference in Dallas, Texas.