Six teams of young entrepreneurs pitched their ideas before judges and a large audience at the Darla Moore School of Business' Proving Ground on Thursday, Nov. 17 for the opportunity to win cash prizes and startup support.

The dynamic and fast-paced pitch competition marked the seventh year for the university’s entrepreneurial challenge for students and young alumni. This year’s prize pool totaled $52,000.

Rob Castellanos, a 2016 graduate from Atlanta whose idea was born from the personal difficulty of working with multiple doctors over years to find a diagnosis. His concept Syndiyo is an application for patients and caregivers to consolidate personal medical records, find the latest research on their medical condition and identify opportunities to participate in medical studies. Castellanos won the Avenir Discovery $17,500 prize.

Castellanos already has plans for the money.

“My developers were going to be doing this for free,” Castellanos said. “But I believe you should be paid. So this will allow me to pay them some salary.”

Barkley, an economics major from Fort Mill, South Carolina, and Roberts, a political science major from Charlotte, North Carolina, won the Maxient Innovation $17,500 prize. As the winner, they will represent the university at the Southeastern Conference (SEC) Pitch Competition in April, which will take place at the University of Florida. The regional competition hosts teams from each SEC school in a format similar to The Proving Ground.

“This money gives us the exposure and ability to actually build an app,” Roberts said. Barkley says it also gives them the start they needed to approach investors.

The two main prize categories were judged by a panel comprising alumni and entrepreneurs Candice and Aaron Hark, founders of Maxient; and Darrin Thomas, president of Thomas Media Group; and Ambrose Schwallie, director of corporate development for the South Carolina Research Authority (SCRA).

Dean Kress, associate director of the Moore School’s Faber Entrepreneurship Center, has directed the competition since the beginning. He said the role of the judges goes beyond the finale because their feedback helps all the competitors fine tune their startup concepts.

“Our judges did a tremendous job in the Maxient and Avenir categories,” said Kress, “Both winners were terrific concepts, and I believe all four will be successful.”

The Proving Ground also featured a Fan Favorite category in which the audience questioned the two finalists before selecting a winner.

Seniors Miller Love of Irmo, South Carolina; Samantha Kear of New Hope, Pennsylvania; and Jessica Theirgartner of Severna Park, Maryland, pitched their application idea, titled Beacon. It provides a way to coordinate volunteers and organizations’ relief efforts during and after a natural disaster. With the win, the team is ready to begin building the app.

“This is a really huge step to have gone from zero funding to actual funding,” Theirgartner said.

The Proving Ground began in 2009 with a prize pool of $3,000. Judges Candice and Aaron Hark said helping budding entrepreneurs is a passion that keeps them coming back every year.

Supporting their alma mater also fuels their passion and involvement.

“The ideas coming out of Carolina have promise,” Aaron Hark said. “I’m biased, but this is definitely one of the best universities.”

Presenting sponsors for this year included the university’s Office of Economic Engagement, Carolina Productions and the Moore School’s Faber Entrepreneurship Center as well as EngenuitySC. Platinum sponsors for the competition were Maxient, Avenir and SCRA. Gold sponsors were Fluor and LivePlan. 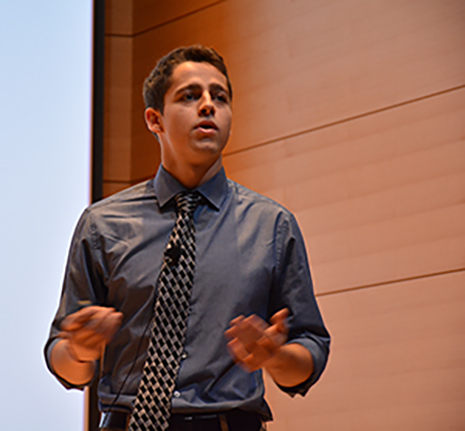