Keeping it in the family: Siblings find a home in Moore School Master of Human Resources program

It’s not unheard of for brothers and sisters to follow each other to the same colleges. In fact, a Harvard study found that about 20 percent of younger siblings enroll at the same colleges their older siblings attended. Here at the Darla Moore School of Business, there are several sets of siblings following in each other’s footsteps by not only attending the same school, but also by going through the same program — the Master of Human Resources program.

In the Clair family, older brother Cullen Clair was the first to enroll in the program. Originally from Cleveland, Ohio, the now-associate HR manager for Frito-Lay was “practically dragged” to USC by a high school friend’s mom when they were going on college tours.

“I used to vacation with my friend in Kiawah, so our junior year of high school, we decided to do college tours while we were down here,” he said. “I was fed up with touring by the time we got to USC, but as soon as I set foot on campus, I knew I had to go there.”

He ended up going straight into the MHR program because he realized he would get more job satisfaction out of an HR career than if he were to go to medical school as he had originally intended. Shortly after he graduated in December of 2013, his sister, Mary Clair, was considering making a job change as she didn’t feel she was reaching her full potential. After talking to her brother about the program, she knew it was the right fit for her.

“He’s probably the reason I applied,” she said.

Mary, who will graduate from the program in December, likes that it’s easy to get to know everyone with the small class size. She also admires how invested professors are in the success of individual students. Bailey Glenn also appreciated the professors’ investment in her personal career.

“The most valuable part about the program is the ability to build relationships and network with faculty and staff who are well-tenured in their own field,” the Pepsi HR representative said. She graduated from the program in 2015, and her sister, Chelsea Glenn, will graduate in December.

“Bailey spoke very highly of the program and suggested I look into it,” Chelsea said. “I’m here because of my sister’s success in the program.”

Chad Hall not only followed his brother through the program, graduating in December of 2015, but also ended up working at Frito-Lay, which is where his older brother, Adam, worked before becoming an HR manager at Eastman Chemical Company. Both brothers wanted to work in roles where they felt they made an impact in the everyday lives of other people. Although, Adam says, “every day is different,” he feels he has a positive influence on the lives of others since his graduation in December of 2013.

“The most rewarding thing is the ability to make a positive impact,” he said.

Chad works in the field and enjoys “feeling really connected” to those he works with.

“I wanted to work a job where I felt like I added value,” he said.

Both admired the initiative of the Moore School to bring in top HR companies and expose students to a variety of senior leaders; as did Shannon Wolcott, senior HR operations partner at Halliburton. She was first attracted to the program, however, by the caliber of the professors and the UK study abroad trip.

“The Moore School has a little bit of everything,” she said. “There’s kind of a family environment.”

She and her brother have always been close, but they’re “very different.” They were similar, however, in that neither knew what career they wanted to pursue. After coming to her Dec. 2014 graduation though, Brennan Wolcott had a better idea.

“I’m so lucky my sister went through the program before me,” he said. “I think she really helped open the door for me that might have not been opened had she not been there. It’s one of the best decisions I’ve ever made in my life." 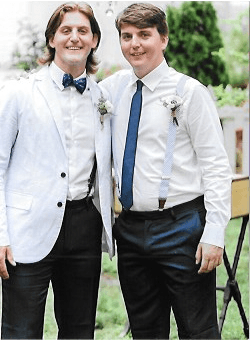 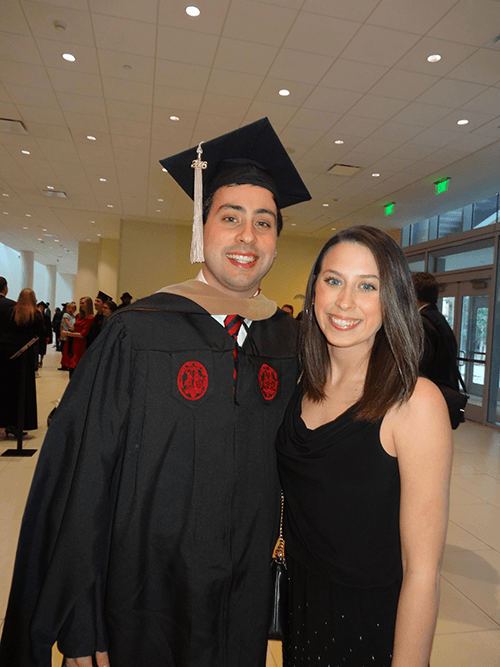 Brennan (left) and Shannon at his graduation in 2016. Shannon graduated from the program in 2014. 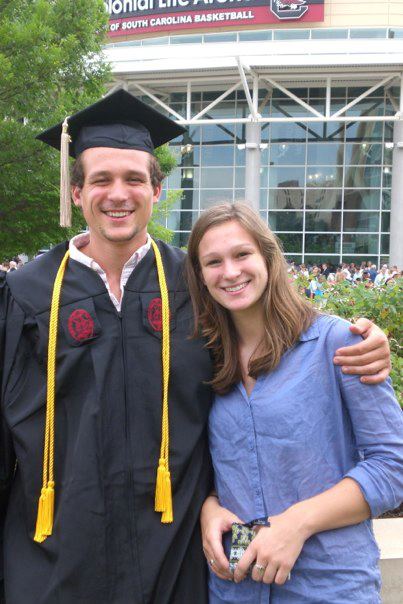 Cullenn (left) and Mary at his graduation in 2013. Mary decided to join the MHR program shortly after.