Many students are content to earn just one college degree before joining the working adult world, but MACC student Jacqueline Wallace has fully embraced the idea of lifelong learning.

She’s graduating in December from the Moore School’s Master of Accountancy program, completing her fourth college degree. But holding four degrees might not even be the most impressive part of her resume — Wallace served in the military for 30 years, making her way to the high rank of Warrant Officer 5. She will be the first female veteran to earn her MACC degree from the Moore School.

“I enjoyed my career in the military, but when I retired, I just felt it was time to broaden my horizons a little bit more and take on some new challenges,” Wallace said of her decision to go back to school.

Wallace began her third degree, her bachelor’s in accounting, at the Moore School in the fall of 2013 after discovering she had a knack for accounting. She decided when she graduated in December of 2016 that she would stay on and earn the MACC degree. She was surprised to hear that she is the first female veteran at USC to take that route.

“I really thought by now there would have been someone else finishing up the MACC, but I guess somebody has to be first,” Wallace said.

Although now she is more self-motivated than anything else, her family was a major motivator in her going to college initially. Her attending college was a huge goal for her grandmother because she herself never got the chance.

“She didn’t care what I studied as long as I went to college and took advantage of those opportunities she never had,” Wallace said.

Her inner drive to always learn, grow and improve herself was instilled in her by her family, Wallace said, and it was their example she followed when she decided to join the military. Her grandfather and great uncles served in World War II, and her grandmother and great aunts were Rosie the Riveters during the war, working in factories making munitions. Despite her family’s involvement in the military, she never thought she would make a career out of it.

“I went in to serve, and an initial six-year enlistment turned into 30 years,” Wallace said.

Throughout her service, she was stationed all over the U.S. and in several places around the world, such as England, South Korea and the Middle East. She worked long hours, but she took advantage of wherever she was stationed by getting out to see the history and experience the culture.

“That’s one of the benefits of the military: you get to travel the world and actually live in a place, so you can really get familiar with the folks from different cultures,” she said.

Wallace plans to stay in South Carolina for a little while, though, as she has accepted an offer to work at a local business after graduation.

“For the second half of my career, I’m really excited about embarking on this new career in accounting,” she said. 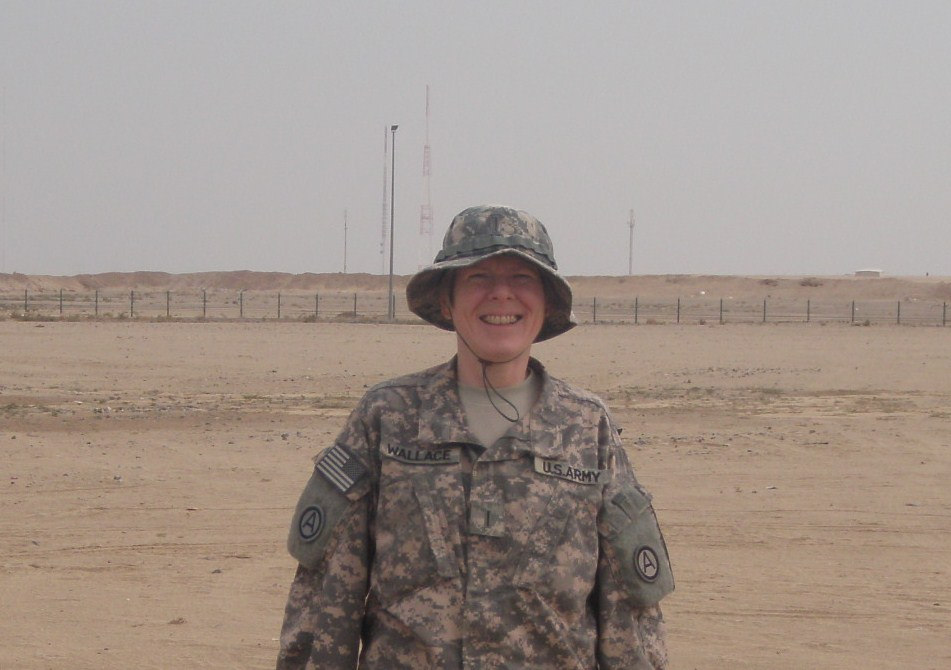 Here's Wallace in Kuwait when she was serving with Third Army/U.S. Army Central Command, "Patton's Own."