International Business and Chinese Enterprise first-year student Nicolas Ferguson is the first Darla Moore School of Business student to be awarded the Boren Undergraduate Scholarship since 2010. This national scholarship provides up to $20,000 for a year for a student studying a language related to national security.

Ferguson will be traveling to Hong Kong at the end of May where he will spend the next year and a half taking intensive Chinese language courses as well as business courses. The Boren scholarship will help cover things related to his studying abroad such as housing, transportation and books.

“I joined the IBCE program because I really liked the idea of studying abroad for so long,” he said. “It’s so great that I got the Boren, especially as a freshman, because it will help cover my study abroad costs.”

Ferguson will take 12 credits of Chinese at the Yale-China Chinese Language Centre at The Chinese University of Hong Kong this summer. During his sophomore year, he will take another 12 credits of Chinese alongside typical business classes. Then, for his junior year, he will return to the Moore School, but he will return to Hong Kong for the first semester of his senior year.

As part of the Boren scholarship, Ferguson will work for the federal government for a year following graduation. He is also part of army ROTC, so he plans to serve on active duty in the military after graduation as well. 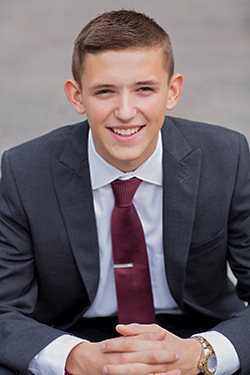 First-year international business student Nicolas Ferguson is part of the next IBCE cohort.