David Crockett, associate professor of marketing, received this year’s Williams-Qualls-Spratlen (WQS) Multicultural Mentoring Award of Excellence, given out since 2010 by the American Marketing Association. As a personal mentee of each of the award’s three namesakes, Crockett was thrilled to not only win the award, but also to be doing work of a caliber worthy to receive it. We spoke with the associate marketing professor about his background, his research and how the award will affect his work moving forward.

Where are you from originally?

I lived in New Jersey as a small child, and then at the start of high school, we moved to St. Louis.

Where did you go to school?

How long have you been at the Moore School?

What initially brought you here?

When I was looking for jobs, the Moore School was attractive to me because it has a long-standing reputation in marketing research, particularly consumer research. I do a lot of work on sociological issues, and that doesn’t fit with every department, but I knew this would be a place open to many styles of research.

Tell me a little bit about your research.

I work on sociological aspects of consumption, so I’m interested in why people buy what they buy and how they use what they buy to build lifestyle. I just completed a study that will appear in the Journal of Consumer Research later this year about how people manage stigma, particularly racial stigma. Once you are defined to be a member of a group that is very low in social status or you have an identity that is stigmatized, what are your responses to that? A lot of research on this topic is about how people try to make collective social change —they may march or boycott, and that stuff is super important, but there is also this kind of day-to-day, everyday life part of it that is less amenable to those kinds of things.

So on a day-to-day basis, how do you manage if people think you’re likely to be a criminal or that kind of thing? What I end up talking a lot about is how people use consumption as a tool to manage that kind of stuff. People use one of two broad strategies: They use their consumption to discern and then avoid things that are stigmatized or stereotypical, so if you know your identity has been stigmatized, you may try to act in a way that is not consistent with the stigma. The other thing that you can do is use your consumption to try to destigmatize your identity. If certain things are stigmatized, you use them anyway, but you use them in ways that aren’t consistent with the stigma because you’re trying to remove the stigma.

What tended to matter in terms of whether the people I talked to thought what they were doing was successful really had a lot to do with where they live. It’s not really a function of how well people are doing it; it’s really a function of the racial dynamics that are in place where you live. It turns out that one of the really key things that determines whether that strategy works is the percentage of slaves in your county in 1860. That really surprised me.

Tell me a little bit about the WQS Multicultural Mentoring Award of Excellence.

The American Marketing Association gives a series of awards every year for a variety of things. One of the awards they began in 2010 is about mentoring students. This particular award is for multicultural mentoring, so mentoring students across a variety of identities with a focus on students who have been traditionally underrepresented in the academy. The award is named after three of the first scholars in marketing who are people of color — Jerome Williams (Prudential Chair in Business and Research Director at The Center for Urban Entrepreneurship & Economic Development, Rutgers Business School - Newark and New Brunswick), who is part of a second wave of black scholars in marketing; Bill Qualls (Professor of Marketing, University of Illinois at Urbana-Champaign), who is also a part of that second wave; and Thaddeus Spratlen (Emeritus Professor of Marketing at the Foster School of Business, University of Washington), who was one of the first handful of African-American marketing professors. He was a personal mentor of mine, so the award was important to me because all three of them have had a hand in mentoring me.

Since I’ve been here, I’ve tried my best to mentor other students however they come to me. I’ve been instrumental here in the department with trying to recruit Ph.D. students from a variety of backgrounds. I’ve had three students whose dissertations I’ve chaired since I got here in 2002. I also work with an organization that does a lot of work with marketing doctoral students of color at all the schools that have them — The PhD Project. I help with programming and do some informal mentoring with them. And I’ve done some work with a national marketing faculty of color organization that I helped start — I’ve rotated off the board to let some of the younger folk take over, but that’s been around for 10 years now.

I was nominated by some of my colleagues in secret, so I didn’t know until I got the call that I won the award. From 2010 until now, let me just say that I’m by far the least accomplished person to have won the award. I’m very much humbled by it, and I hope to live up to it.

What was your first thought when you got that call?

That it’s the only award in the discipline that I care about. The other stuff doesn’t matter to me, but this was cool.

How do you think receiving this award will change your outlook going forward?

I’m hoping it won’t change my outlook, but it will make me think about it in a more systematic way. I always thought of myself as just doing the stuff you’re supposed to do, but this is important. It’s worth it to be engaged in a way that is more systematic. I’m at the point in my career where it’s important that I’m helping other people be good mentors. I’m not going to be around forever — I’m not old, but I’m not young either — so trying to encourage other people to become mentors is probably something I’m going to add since winning this award. That stuff matters too because we have to keep it going.

What would you say to other students or professors aspiring to win this award?

What matters is how you can help people along the way. The people whose names are on that award didn’t just travel the road less traveled — they made the road. What’s nice for us is that we don’t have to do that anymore, but our job is to maintain it. You don’t have to reinvent the wheel — there’s already plenty out there for you to get engaged in, so get in where you fit in. No award is promised to anyone, but the work is so important, so if you have even the slightest inkling toward doing it, you need to be out there doing it. 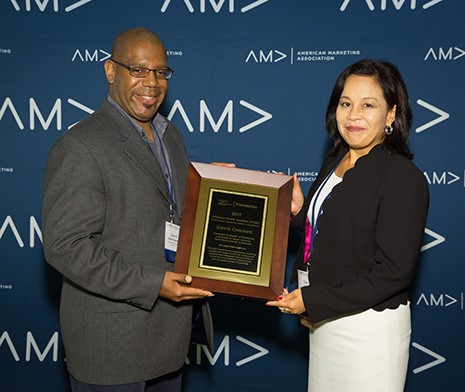 David Crockett received the WQS Multicultural Mentoring Award of Excellence, given out by the American Marketing Association, for his mentoring work with Ph.D. students.