The second annual SC Econ Day brought almost 100 students from seven high schools around the state to the Darla Moore School of Business to put their economics knowledge to the test. The students were split into 19 teams that each competed in one of two divisions — the David Ricardo division and the Adam Smith division. In the final two Jeopardy-style quiz rounds, Ridge View High School’s team “The Economic Indicators” and Wando High School’s team “Make Econ Great Again” took home the win in each division.

In addition to taking home prize money, the competition winners are eligible to advance to the national semi-finals where they would compete for the opportunity to go on to the National Economics Challenge in May. Not only would semi-final winners get an all-expenses-paid trip to New York City, but they would also be competing for over $20,000 in prizes against thousands of high school students from across the country.

SC Econ Day is put on by the nonprofit SC Economics with the help of the Darla Moore School of Business. This competition is just one of the many ways that SC Economics strives to improve economics education at the grade school level.

“I think the students involved were genuinely excited, and I love that most of them stayed until the very end,” said Amanda Stiglbauer, program director for SC Economics.

Between the competition portions, the high school students got to hear from current Moore School economics students and professors about what they do and why they choose to pursue economics. Students had the opportunity to attend four different sessions to learn about topics such as game theory and environmental economics.

“I went to a breakout session about the trajectory of agriculture in economics, and it was really intriguing,” said Cam Lavallee, first-time participant from Wando High School. “I would absolutely recommend this competition to other students. It was a great experience from beginning to end.”

Although most of the professors involved are from the Moore School, a few professors from other universities in the state also participated. Gary Stone, an economics professor at Winthrop University, has been involved with SC Economics for 42 years and is currently a member of its board.

“My favorite part is interacting with the students,” Stone said. “It’s important to be developing interest in economics at this level of a student’s academic career.”

“The students were enthusiastic, the event was well run and everyone had a great time,” she said. “It was refreshing to see so many young folks not just interested in economics but eager to learn, compete and expand their horizons.” 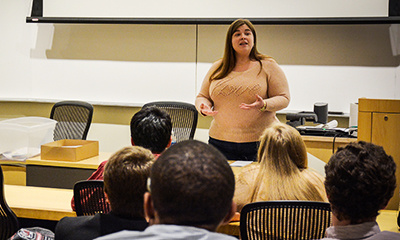