Burton is a sophomore in standing, but this is his freshman year at the University. He became interested in the Moore School because it was close to home, it is a major ranking business school, and lots of his friends are attending the University of South Carolina. He knew he was interested in business from the time he was in elementary school, when his dream was to become a CEO. Accounting equates to financial literacy for Burton. He believes that sound accounting builds a good foundation for a successful business, which is why he has chosen to be an accounting major.

Burton will be a resident mentor in the Green Quad Living and Learning Community next year, where he currently resides. He has been inspired by the ecological efforts made at Green Quad and other areas of campus and this has led him to become an environmental studies minor.

Burton is also interested in psychology, which brought him to the topic for his entry in the University Libraries’ Research Award competition. His paper, “Real People Laugh,” examines laughter and the ability to laugh at ourselves in relation to self-motivation and the ability to overcome one’s flaws. He uses the comedy of Kevin Hart as an example of how this form of humor — self-deprecating humor — can be beneficial. He explains that when Hart makes a joke at his own expense he is actually “acknowledging [his shortcomings] and explaining how they make him a better person.” He uses this tactic to “motivate [his] audience about [their own] individual flaws.” In fact, he points out that J. Yim of Sahmyook Univeristy supports this view when he states: “Laughter is a non-pharmacological, alternative therapy treatment.”

Whether Burton uses this particular method to motivate himself, it can be said that he is goal driven. He was recently accepted into the Honors College, works five hours a day at a real estate agency setting up appointments for house viewings, will be an RM in the fall and works hard on his future degrees. As to what he will do with his accounting degree, Burton states that “all options are open.” He believes that time spent is public accounting is very valuable to whatever career he will pursue in the future, knows he wants to obtain a CPA, and is considering grad school.

His advice to future freshman is practical and encouraging. “Don’t be afraid to step out of your comfort zone. The more you do, the more you grow. And don’t give up!”

Without a doubt, giving up is not on Darren Burton’s agenda. 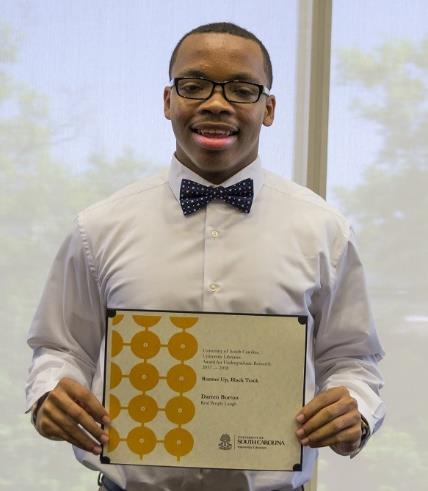