Originally a first lieutenant in the U.S. Army between 1968-1970 that included a tour in Vietnam, Bearden earned his marketing Ph.D. in 1975 in what was then the UofSC College of Business, now the Moore School. He taught at the University of Alabama and Western Kentucky University between 1975-1978 before coming to South Carolina. He remained at the Moore School for the next 32 years before retiring. Ever the dedicated professor, he continued as an adjunct for another three years after he retired.

Now a Moore School Distinguished Professor Emeritus and the Bank of America Professor in Business Emeritus, Bearden was well-loved by his students. Donald Lichtenstein (’84 Ph.D.) initially took Bearden’s classes at the University of Alabama in 1976 and 1977 as an undergraduate. After working for a few years, Lichtenstein decided to go back to school for his business doctorate and chose South Carolina mainly because Bearden was then a professor at UofSC.

Bearden “mentored me both professionally and personally – and his wife also took me and other students under her wings, too,” Lichtenstein said. “To this day, I consider him the most impactful person in my life outside my parents. He has mentored many Ph.D. students who have gone on to have very successful careers. Not only is he a great professional mentor, but he has such a nice personal way about him. He really cares about his students as individuals.”

While Bearden is recognized as an indelible teacher and mentor, he said one of his proudest achievements is seeing his own doctoral students go on to have illustrious careers.

“During my time at UofSC, I chaired 20 or so Ph.D. dissertations,” Bearden said. “Now these doctoral students are successful faculty at their own universities. This involvement was the most satisfying aspect of my career at the Moore School.”

Bearden served in several leadership roles during his Moore School career, including as the co-director for UofSC’s Lilly Fellows Foundation faculty mentoring program from 1992-1995, as director of the marketing department’s doctoral program from 1995-2003 and as the UofSC athletics faculty representative to the SEC and the NCAA from 2006-2010.

“Being the athletics faculty representative was one of the most enjoyable aspects of my time at UofSC,” Bearden said. “The athletics department is very large and complicated. Everyone I encountered was most supportive and fun to work with.”

Bearden’s leadership, scholarship and mentorship made him a well-rounded and talented professor, Lichtenstein said.

In their nomination letter, Lichtenstein and Janiszewski said Bearden is “one of the top consumer behavior researchers with Ph.D. degrees from the 1970s…Bearden is a member of the ‘research elite’ because he is prolific and because he exemplifies quality.”

They go on to acknowledge that Bearden is one of less than 50 in the marketing field to have more than 25 articles published in first-tier publications. His work has been cited more than 6,800 times in the Web of Science search index. Bearden has been cited more than 25,000 times on Google Scholar. Lichtenstein and Janiszewski tout Bearden’s role as a mentor to dozens of Ph.D. students as playing “an instrumental role in advancing consumer research.”

A scholar of consumer behavior and marketing management, Bearden estimates over the course of his career that he published more than 70 scholarly articles in peer-reviewed journals and gave more than 60 national peer-reviewed conference presentations. He also co-authored three books. Analysis by the ACR Fellows award selection committee indicates other scholars have cited Bearden’s work 16,200 times.

In the academic marketing realm, Bearden is considered an expert in pricing, scale development and social influence; he is the 2003 recipient of the Fordham Lifetime Achievement Award in behavioral pricing.

“Over the past 30 years, I have interacted with [Bearden] at conferences, during visits to South Carolina and in phone conversations about prospective Ph.D. students,” Janiszewski said. “He is one of the most thoughtful people, both intellectually and socially, I have ever met. People like Bill deserve to be recognized because they exemplify what it means to be a great scholar and supportive mentor.”

The ACR Fellows award recognizes those that have shaped the field of consumer behavior and furthered the interests of ACR in significant ways. These include developing a significant body of scholarly work that has had a sustained influence on the field of consumer behavior, contributing theoretical and/or methodological innovations that have a continuing influence on the field, authoring highly cited works that have a major and ongoing impact on the field, developing research-based programs that improve consumers' quality of life in lasting and important ways through innovations in scholarship, policy, or practice and advancing doctoral education through mentorship and service.

As far as Bearden enjoying retirement after receiving his ACR Fellows award, he still keeps up with consumer behavior research so he can serve as an expert in testimony cases. He mostly testifies in court about intellectual property, consumer decision-making and pricing; he said he has testified in more than 25 cases in recent years. 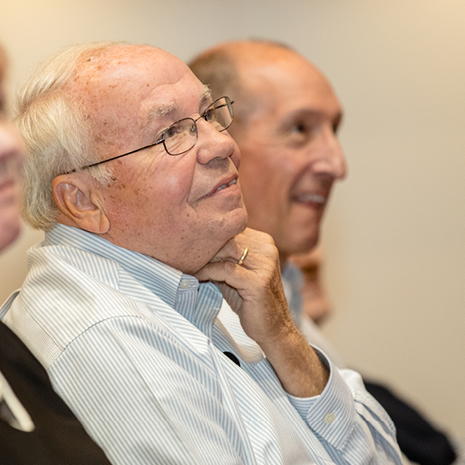 Retired Moore School professor William Bearden, who also graduated from South Carolina with a marketing Ph.D. in 1975, was recently named an Association for Consumer Research Fellow for his outstanding scholarship and mentorship to others in the field.

Learn more about the Association for Consumer Research