The Darla Moore School of Business recently hosted a Centennial Gala honoring Darla Moore for her plentiful contributions to the school.

Moore was awarded the 2019 Centennial Distinguished Service Award at the gala.

“What an amazing first for our school to be associated with,” Brews said. “To succinctly capture Darla Moore’s contribution to our school tonight, I thought it best to address a simple question: Where would the school be if not for Darla Moore’s 20 years of support and involvement?”

In addition to providing the funding for half of the new business school building, which opened in 2014, Moore is known for providing scholarships and fellowships for students.

“The scholarships and fellowships Darla’s philanthropy have provided have permitted literally hundreds of students to receive an education they otherwise might not have been able to afford,” Brews said.

Moore has contributed more than just her money to the school, Brews said.

“She has also placed her character and identity behind the investments she made in our school,” he said. “Darla demands excellence from everything that the school associated with her name offers and expects our faculty, staff and students to perform at the highest levels possible.”

Moore, once described on the cover of Fortune magazine as “The Toughest Babe in Business,” was lauded in a video at the gala as a formidable businesswoman, a generous philanthrope and a supportive mentor to students. Notable appearances in the video included former U.S. President George W. Bush, former Secretary of State Condoleezza Rice and lifestyle entrepreneur Martha Stewart.

“We appreciate her generosity and dedication to higher education,” Bush said in the video.

Moore delivered a keynote address at the gala with her usual notorious humor, Southern charm and directness.

“This is a humbling evening. I’m speechless. You could’ve done a lot worse for a namesake,” Moore said with a laugh.

Moore spoke about the student loan debt crisis and emphasized how students need to be better prepared for college and need to better understand how loans will affect them post-graduation.

“How can we unmake this college debt crisis that threatens to unmake us – and that is, at the moment, leaving millions of students with too much debt and too few opportunities?” Moore asked. “It’s easy to declare the future too cloudy and unpredictable and to shrug your shoulders at this generation of students…But that’s not right; that’s not what students are paying us life and limb for. They’re paying educators to know the road ahead, and we better have some knowledge of the map.”

She said that the Moore School is preparing top-notch students for careers that will help them manage student loan debt while also making a mark on the business world.

“‘The ranking,’ I thought, ‘doesn’t mean a thing if our students aren’t leaving Columbia with offer letters in one pocket – and some hard skills in another,’ which relying only on international business alone they probably wouldn’t have.”

Moore lauded the business school with requiring international business students to complete a second major in fields like finance, marketing or supply chain management. She said employers tend to base jobs and starting salaries on students’ second majors.

The undergraduate business program has made smart decisions in recent years like changing to a four-year program that spans a student’s entire undergraduate experience, scheduling accounting, statistics and economics in the freshman year and requiring a 3.0 GPA to progress to sophomore year, Moore said.

The added emphasis on business analytics for all students also contributes to students’ overall marketability in the work force, she said.

“The bottom line? As far as we can tell, ours is the first undergraduate business program in the country where the goal is every student graduates data proficient, analytically capable and functionally based,” Moore said. “That’s many students – 18 percent of the University of South Carolina’s Columbia campus students are at the Moore School.”

Moore did not negate the other 80 percent of UofSC-Columbia students, especially those focused on liberal arts.

“Studying Beowulf and the Impressionist Movement and comparative politics are not worthless pursuits,” she said. “Far from it. I wouldn’t be where I am today without the savvy and soft skills taught in my political science classes.

“But those soft skills must be coupled with some hard ones like those our school teaches. Many students pursue dual degrees and minor or double major in domains outside of their primary majors. Universities like this one should make such combinations mandatory, like our international business majors who complete a second major.”

“I doubt many of us will be here to celebrate our 200th,” she said. “But I am sure that it will be celebrated; and that our legacy won’t just be a legacy for this school but a legacy for all schools.”

UofSC President Harris Pastides concluded the evening by expressing the impact Moore has had on his tenure as president.

“I’m a better president, and we’re a better university because of [Darla Moore],” Pastides said. 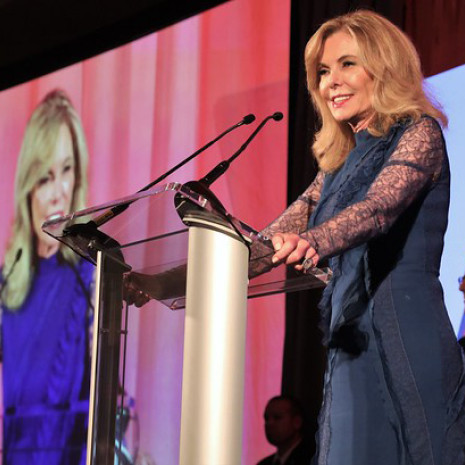 Darla Moore was awarded the 2019 Centennial Distinguished Service Award at a recent Centennial Gala. The Moore School was named for her in 1998; it is the first major business school in the country to be named for a woman.