Darla Moore School of Business international business assistant professor Christopher Yenkey uses a social approach to examine how investment markets are built. Yenkey, who received his Ph.D. in sociology from Cornell University, starts from the assumption that social norms and relationships are an important part of how people come together and begin to exchange.

In his lectures to International MBA and Professional MBA students, Yenkey ties these sociological lessons to the Moore School’s Sonoco Department of International Business, which trains students to understand the complexities of doing business around the world, including at home in South Carolina.

Showcasing the complexities of doing business, one aspect of Yenkey’s research indicates having a trusting relationship with your investment partners may make you more rather than less vulnerable to fraud and other forms of opportunistic misconduct.

Published in Administrative Science Quarterly and the American Journal of Sociology last year, Yenkey’s paper suggests people are actually better off dealing with someone they don’t fully trust because they tend to watch them more closely.

“If we transact with people we trust and don’t trust, then a good question to ask is if the trusting relationship is actually better for us. I find the opposite, that we can be treated better by people who know we don’t trust them. They are the ones who know we’re keeping an eye on them and that prevents them from taking advantage of us.”

Yenkey’s background in sociology directs his research in a different way than the typical mainstream economist, who typically believe that markets are a natural phenomenon, he said.

A typical economist “would argue that most of the necessary information for making a decision about what to buy or sell is captured by a price,” he said. “A social approach looks for how relationships and norms help people decide what goods or services should be traded and what a fair price for them is.”

Yenkey demonstrated how social dynamics can change markets in a long-term study of the development of Kenya’s emerging stock market, the Nairobi Securities Exchange. Kenya was an ideal setting for this kind of work, as Kenyan politics and businesses are strongly influenced by membership in ethnic tribes, Yenkey said.

After publishing research on how ethnic relationships influence the decision to invest in the stock market initially, Yenkey turned his attention to explaining how those same relationships affected investors’ likelihood of being defrauded by a corrupt stockbroker and whether or not fraud victims keep investing.

Kenya‘s largest stockbroker was expelled from the market in 2008 after defrauding a quarter of its 100,000 clients. Yenkey looked at who the corrupt broker was stealing from and how these defrauded investors reacted.

In particular, he wanted to know if the broker was more likely to steal from clients who belonged to his same tribe or if he stole from clients from distrusted rival tribes. The executive management team at the stock exchange gave Yenkey access to their electronic databases, which showed all the accounts that were defrauded as well as the surnames on those accounts. In Kenya, surnames are very tightly linked to ethnic tribal membership.

The results surprised everyone, Yenkey said. The main social predictor of the corrupt broker’s victim selection is that he avoided stealing from clients who belonged to rival tribes. The data further showed the reason why: when the corrupt broker started stealing from the clients, these ethnic rivals were quick to close their accounts and move to another broker. The rivals were keeping an eye on their broker, and that additional monitoring gave them the protection that the broker’s own tribe, who assumed they didn’t have to monitor their account, expected.

Further, Yenkey finds that these victims from his own tribe are the most likely to continue to invest even after experiencing the fraud, and they even choose another broker from the common tribe.

“Even after the fraud, they continue to believe that staying within their social group will protect them,” Yenkey said. “But the opposite seems true – it makes them more vulnerable to the next deviant looking for an opportunity. It’s easy to study social dynamics in Kenya because we can code tribal membership by last name, but ‘tribe’ is just a metaphor. We all understand that it’s alive and well in the U.S. and in South Carolina.

“It’s harder to study here because political affiliation, for example, is harder to measure,” he said. “You’re free to choose what you believe and who you support, but when you use political affiliation to determine who to trust you’re probably making things worse for yourself because you’re likely to stop doing basic due diligence. Opportunists are all around, and their prey are people who stop asking questions.”

Yenkey shares these kinds of examples with his students so they know the best methods to use when they conduct business.

“We need our students to understand all the ways that businesses succeed and fail so they are better prepared to be tomorrow’s leaders,” he said. 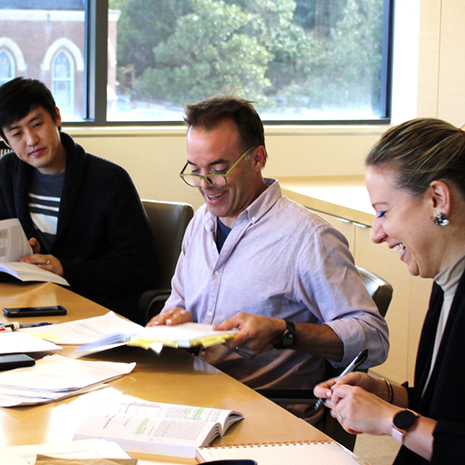 Moore School assistant professor Christopher Yenkey recommends in his research a "healthy skepticism" when trusting an investor with your money.