The globalization debate and its impact on South Carolina

In general, international trade and investment can offer not simply new markets, employment and financing but also access to new technologies. Over time, local firms and their employees would ideally become more competitive with improved capabilities and skills.

Over the past 30 years, South Carolina has sought to greatly internationalize its economy, particularly in manufacturing and through the expansion of the Charleston port. From 2000 to 2017, South Carolina exports grew from $8.6 billion to $32.2 billion, or more than 15 percent of the South Carolina GDP (gross domestic product). These numbers underestimate the economic benefits since they do not include supplying export firms located in other U.S. states.

The state’s top exports are in aircraft, motor vehicles, vehicle components, machinery and rubber products. What is noticeable about these products is that they are highly complex, in turn creating indirect benefits for the region via additional suppliers providing the different inputs to the manufacturing process. As shown in the graph below, the top countries to which South Carolina exports are China, Canada, Germany, the United Kingdom and Mexico.

Right away, these data reveal how important the ongoing trade negotiations and conflicts can be to South Carolina. On the one hand, trade has brought tangible benefits to the state. For instance, a report on South Carolina from the Business Roundtable stated, “trade-related jobs grew 4.6 times faster than total employment from 2004 to 2013.” On the other hand, protracted conflicts about trade agreements regarding North American Free Trade Agreement (NAFTA), the European Union (EU) and China would likely have a direct and significant negative impact on the state.

South Carolina has also benefited from foreign direct investment (FDI). Foreign companies have invested in the state to sell products and services domestically and internationally. According to data from the U.S. Bureau of Economic Analysis, over the last 10 years alone, direct employment from FDI has increased by about 40 percent to over 140,000 jobs. On average, for every FDI job created, four more indirect jobs are also created.

Over the past 15 years, capital investment from FDI has totaled about $50 billion. South Carolina captures about three percent of the total FDI in the United States, well beyond its share of GDP or population. The state also has one of the highest ratios of FDI per person in the country. The leading companies that invest in South Carolina come mainly from Europe, Japan, Canada and China.

Again, it comes as no surprise to find a close relationship between the countries that South Carolina has the strongest trade relationships with and with those that invest most in the state. This is quite common in a world of increasing economic integration. It also highlights how sensitive the South Carolina economy can be to international disputes.

Just as the globalization debate has made us think about who wins and loses despite the growth that foreign trade and investment can generally promote, one must consider how South Carolina can deepen and expand the benefits from its ongoing process of internationalization. The above trends are aggregate, but scratch below the surface and one can find great variation.

For one, not all investment is the same. Also, there are real costs to attracting investment, such as tax benefits, public investment in infrastructure, job displacement and potentially undercutting worker representation. The South Carolina Department of Commerce has led the efforts to attract investment from pioneering countries from around the world. However, its key challenge is to try to bring investments that offer not only immediate, direct benefits, but especially what we call “spillover benefits,” such as the development of a large local supplier base, new technologies and training, as well as research and development.

The most prominent example is the relationship that the state has created with BMW. Because of its consistent investments into advanced manufacturing systems and ever-more sophisticated vehicles, BMW has spurred large spillover benefits into the region. Forty of its 300 North American suppliers are located in South Carolina. More than 80 percent of its vehicles are exported. BMW has been a leader in advanced manufacturing skill development, bringing the famed German apprenticeship system to the region.

According to the Division of Research at the Darla Moore School of Business, the multiplier effects of BMW investments are substantial — for every job created directly by BMW, another 10 have indirectly been created. The indirect and induced impact by BMW on economic value added (EVA), a key indicator of economic spillovers, is almost three times greater than the direct impact.

However, is BMW an outlier? South Carolina has also offered great economic inducements to other companies that bring less positive spillovers, such as cheap assembly operations, with few suppliers and little labor training. Hence, the state must focus on ways to attract more sophisticated investments and professions. A key factor will be education. South Carolina is ranked 48th in the U.S. in the quality of public education and has been a leading state in cutting funding to higher education. Moreover, compared to its peers, despite important advances in the South Carolina system of vocational training, it remains notoriously underfunded.

Another key issue for South Carolina is the degree to which there is broad-based participation in the export value chains that have been created. South Carolina, like its peers, is dominated by small and medium-sized enterprises (SMEs). SMEs are historically the most important engines of job creation and entrepreneurship. However, South Carolina is lagging in SME participation.

According to the U.S. Department of Commerce, despite having the highest export to GDP ratio in the region (15 percent), South Carolina’s SME export value is only 10 percent. This is the lowest in the region. For example, in Georgia, it’s 29 percent; in North Carolina it’s 26 percent; and, in Alabama, it’s 16 percent. An export value of 10 percent reveals that South Carolina may be focusing its policies too much on large firms while needing to improve the institutions and resources that support the competitiveness and internationalization of local SMEs.

In short, South Carolina’s growth can largely be attributed to being integrated into the global economy — through exports and inward investment. But to sustain the initial benefits, the state will need policies to improve local skills and technologies in order to gain better investments, maintain competitiveness and ensure advances for more local firms. 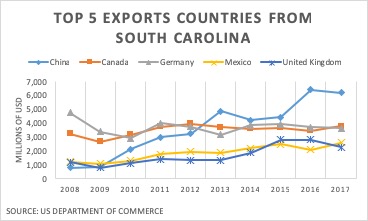 The state’s top exports are in aircraft, motor vehicles, vehicle components, machinery and rubber products. What is noticeable about these products is that they are highly complex, in turn creating indirect benefits for the region via additional suppliers providing the different inputs to the manufacturing process. As shown in the graph above, the top countries to which South Carolina exports are China, Canada, Germany, the United Kingdom and Mexico.