When he completed his degree a decade ago, Moore School alumnus Jesse Bullard (’09 entrepreneurial management, real estate) had high aspirations as an entrepreneur.

With dreams of running his own business, Bullard approached potential investors with ideas.

An event staffer at the time with Southern Way Catering, Bullard even asked his boss, Jimmy Stevenson, if he’d consider investing in one of his ventures.

Instead, Stevenson suggested Bullard consider working his way up to a leadership position with Southern Way.

“I fell into this opportunity to take an already existing company with an incredible reputation and reach for new heights,” Bullard said.

In his first year working full time with the company, Bullard, who majored in entrepreneurial management and real estate and minored in hotel, restaurant and tourism management, was the business development manager. To get an overview of how the company operated, he worked in multiple positions that ranged from floor staff and event cook to specialty station attendant and event captain.

His emersion into the business paid off. Bullard was promoted to general manager in 2011 and named vice president of Southern Way in 2013.

“Jesse’s work ethic is incredible, much greater than I see in today’s young people,” said Stevenson, president of Southern Way. “Probably the best thing you can have in a partner is trust, and I trust Jesse completely.”

Stevenson’s succession plan for the company he started in 1982 is for Bullard and Stevenson’s daughter, Brittany Stuckey, vice president of operations, to run the business together when Stevenson retires.

“He has earned it,” Stevenson said. “Jesse does an incredible job driving business, and my intent is for this business to live beyond me. With young leadership like Jesse and my daughter and several other young professionals we have at Southern Way, that can happen.”

Bullard’s drive and ambitious plans for Southern Way have helped the company grow an average of 30 percent each year since he came on board full time.

Southern Way has grown from seven to 60 full-time employees and from 30 to 200 part-time staff members. Ten years ago, the company owned two trucks and a van. Today, it has a fleet of 15 catering vehicles.

The company has contracts as the exclusive caterer for venues that include the South Carolina State Museum and the university’s Williams Brice Stadium, Founders Park baseball stadium, Colonial Life Arena and Pastides Alumni Center.

Southern Way also caters large-scale events in the Southeast such as Hilton Head Island’s RBC Heritage Golf Tournament and Charlotte’s Democratic National Convention. At South Carolina's annual Parents Weekend, the company serves more than 5,000 university guests in an hour. They also cater weddings that stretch from the Midlands to Beaufort and Georgetown.

“Every time we have the opportunity to work outside of our primary market, in the greater Columbia area, it allows us to build new relationships and grow our footprint,” Bullard said. “A common question we get, is ‘What is your favorite venue?’ My answer is always, ‘One I've never worked in before.’"

On a Friday in May, Bullard traveled between Midlands-area venues from morning until late evening overseeing everything from an American Heart Association luncheon to a formal wedding. Bullard said he typically oversees six to nine events each day.

“To be a strong leader in any business, you have to be present,” he said. “Your employees and your customers have to see you involved and know that you care. Particularly in the hospitality business, my job cannot be done from behind a desk, at my home or on the golf course.

“We're in the event business, and I go to more parties in one night than most people go to in a month. The business is somewhat seasonal, but at least 10 months out of the year, we're averaging 60-hour weeks.”

Despite a full schedule, Bullard has scaled back his hours over the past four years since becoming a father. His wife, Katie Bullard (’09 management, marketing), recently decided to stay home with their four-year-old daughter, Emma Grace, and one-year-old son, Anderson.

“Katie supports me and my crazy hours, the serial entrepreneur with a mind that never stops thinking about the next thing,” he said.

Bullard said maintaining relationships is a lesson the Moore School taught him that has been central to his success in business.

“Whether it be through classmates on a project, serving as fraternity president or meeting with a professor from whom I was seeking a little grace, the ‘real world’ experience of working through life circumstances helped prepare me for similar times to come,” he said. “While very different, I can draw many similarities between those days and current situations of conflict resolution, problem solving and critical thinking.”

Bullard not only focuses on his own success as vice president of Southern Way. He wants to encourage his employees to strive for excellence as well.

“Growing a [once] small business and helping create opportunities for others to grow beyond where they ever thought they could go on their own is where I’ve created my foundation and what I’ve continued to work for,” Bullard said. 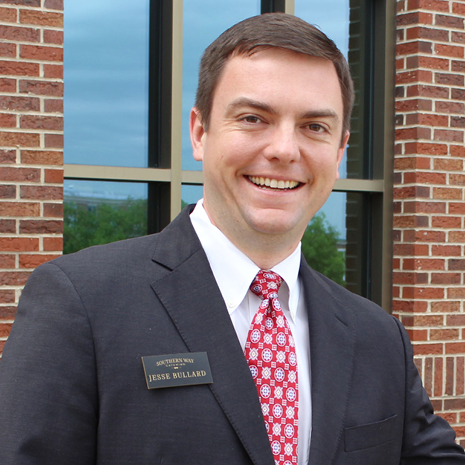 Jesse Bullard dreamed of opening his own business when he was an entrepreneurial management and real estate student at the Moore School a decade ago. Since he graduated and came on board full-time with Southern Way Catering, he has helped the 37-year-old family business grow an average of 30 percent each year.

Connect with Jesse on LinkedIn