The Kittrell family has supported the University of South Carolina for decades even though none of their immediate family members graduated from the university.

An anonymous donor established with $60,000 two endowed full-tuition scholarships in 1990 for what was then the College of Business Administration, now known as the Darla Moore School of Business, in M. Berley Kittrell’s name and for the College of Nursing in Mary Seymour Kittrell’s name. Berley Kittrell died in 1971; Mary Kittrell died in 1979. The anonymous donor asked their daughters, Kay Kittrell Chitty and Rosemary Kittrell, to assist in setting the guidelines for the memorial scholarships.

Nearly 30 years later, Rosemary Kittrell, a well-respected Georgia criminal civil rights attorney and a former National Merit scholar, bequeathed $150,000 to each of the scholarships in her parents’ names after her death in 2018.

Rosemary Kittrell and Chitty stayed in touch with the recipients of the Kittrell scholarships and were touched by the kind words of students who benefited from the endowed scholarships over the past 30 years.

A junior, Myers said receiving the Kittrell family scholarship has alleviated some of the financial pressure of paying for his tuition. Myers, who also receives the UofSC Woodrow scholarship, said he would not be able to attend if it weren’t for his scholarships.

“The Moore School has been great to me my first two years,” he said. “My classes have been challenging, and I have had a lot of great professors. My international business class last semester really pushed me to my limits and made me work really hard.”

Myers is considering working in investment banking but is still figuring out his post-graduation plans.

“I want to be doing work that helps people and makes a difference in their lives, so I’m not sure if I can tie that in to a banking job,” he said.

"A person of great character and a huge personality"

Berley Kittrell would be pleased to know recipients of his scholarship like Myers want to make a difference in the lives of others, Chitty said.

“My father was a person of great character and a huge personality, so much so that the day he died suddenly and unexpectedly, some businesses downtown had to close because the receptionists and people who worked there were so devastated,” she said. “He was the kind of person who could not walk across the street in Columbia without being stopped three times with people asking, ‘How’re you doing, Berley?’. He treated everybody with equal respect, from somebody sweeping the floor to the president of the company.”

Known as a ‘realtor’s realtor’ who spent more than 20 years selling, appraising and developing commercial and industrial real estate, Berley Kittrell’s affability helped him develop relationships with Moore School faculty and staff. He was later a UofSC guest instructor sharing his passion about real estate with students and was an adjunct professor just before his death in 1971.

“Not having been a college graduate himself, he was very proud of his association with the university,” Chitty said. “During his life, he was proud of the university, proud to present there, to give guest lectures and rub shoulders with the students, so they could learn what commercial real estate was and could be.”

“Berley recognized the importance of the university as an asset to the community, state and the world,” said Bob Selman (’59 marketing), a former mentee of Berley Kittrell’s and a Moore School Distinguished Alumnus. “Berley’s leadership style was to take charge, be decisive, yet be compassionate, empathetic and encouraging.”

A pilot, then a realtor

Deemed too tall at 6 feet 6 inches to serve in the Air Force, Berley Kittrell was a civilian flight instructor who taught military pilots to fly during World War II before working in real estate.

The first South Carolinian to be a member of the national Society of Industrial Realtors, Berley Kittrell was president of the Columbia Board of Realtors and a partner in the Keenan and Kittrell commercial real estate firm. He was also a generous and thoughtful mentor to many new professionals like Selman.

Berley Kittrell “taught me the importance of continuing your education, to stay the course but also to give something back and get to know the community,” said Selman, a retired U.S. Navy commander who worked for Berley Kittrell for a decade before his death.

Selman worked for Berley Kittrell’s firm that was later named the Keenan Company for 30 years, leaving after more than a decade as president and chief operating officer. Selman then spent close to 15 years with the S.C. Department of Labor, Licensing and Regulations; he officially retired in February 2011. Selman credits Berley Kittrell’s support and mentorship as a foundation for his later success.

“In addition to tutoring me in the intricacies of conceiving and piecing together real estate deals, Berley made certain that I knew and was known by all the movers and shakers in the community,” Selman said. “He was determined that I would not fail. Often he would grab me in the mornings and say, ‘Let’s go to the local coffee shop and see and be seen.’”

Selman said he and all of his colleagues were distraught when Berley Kittrell died suddenly of a heart attack on his 59th birthday.

“In the few weeks following his death, I became aware of rumors on the street that the company’s doors would close within six months [after Berley Kittrell’s death],” Selman said. “Those naysayers obviously did not realize how well he had prepared all of us to survive and thrive.”

While Berley Kittrell and the business school were a focus for the anonymous scholarship given in 1990, the College of Nursing also received an endowed full-tuition scholarship. The anonymous donor made this stipulation because Chitty was at the time the director of the University of Tennessee at Chattanooga’s School of Nursing, where she was later the dean.

Having earned her bachelor’s degree in nursing and master’s in psychiatric nursing from Emory University in the 1960s and a doctoral degree in nursing from the University of Tennessee, Knoxville, Chitty is a well-respected nursing educator and scholar. She authored the nationally bestselling textbook, “Professional Nursing: Concepts and Challenges,” which Chitty co-wrote with Beth Perry Black for six editions. Chitty, who now lives in Mt. Pleasant, South Carolina, was an adjunct faculty member for the Medical University of South Carolina after she retired in the mid-1990s.

While the College of Nursing scholarship honors Chitty’s illustrious career, it is named the Mary Seymour Kittrell Scholarship after Chitty’s mother, who was a homemaker who never attended college.

“My mother certainly encouraged her daughters to accomplish and seek all the education we could get,” Chitty said. “I think she regretted she didn’t have a profession of her own, but she grew up in a totally different time. Particularly after World War II ended, ladies went back to being homemakers and raising children. But she saw that times were changing and wanted [my sister and me] to have careers.”

With Chitty’s involvement in the two scholarships over the past three decades, she has seen UofSC grow exponentially in what she calls exceptional ways.

“I’m very proud of the way the university has become what it is today,” she said. “The university is now highly sought after. It has wonderful international business programs, and the nursing school has added doctoral programs and a nurse practitioner [track]. I’m just thrilled that it has become a renowned academic institution.” 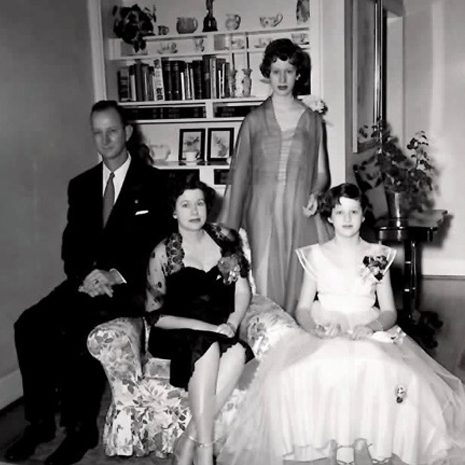 The Kittrell family was honored nearly 30 years ago with a named endowed Moore School scholarship by an anonymous donor. One of the Kittrell daughters bequeathed additional funds to the scholarship after her death last year.

Consider investing in the Moore School