For the case competition, the team, Kathryn Dixon, Sarah Everhart, Caleb Kellogg, MC Lombardo and Praneet Upadhyaya, was instructed to find a solution to fix a toxic work culture within a small consulting firm.

“Currently the firm has a massive generational gap between its partners who own the firm and the fresh college graduates who recently joined them,” Kellogg said. “Everything in the case pointed toward this being a generational problem, but our team decided to refute this statement and focus on the lack of organizational infrastructure.”

Taking this approach, the team concocted a specific approach to helping resolve the human resources issue.

“Since we were taking a bold stance against the specific statements of the case, we realized that our solution had to make sense on how it would correct the problems within this firm,” Kellogg said. “To do this, we created a three-prong strategy that overhauled the organizational structure, competency modeling and communication capability before, during and after a project.”

Essentially, the students proposed an employee value proposition as its strategy, Upadhyaya said.

“The success metrics that we had identified as an outcome of the interventions were retention, trust and performance,” he said. “The aforementioned plan would have eventually led to efficient delivery and client satisfaction, which was the end goal of the strategy.”

The students spent more than 50 hours working on their solution and presentation in the two weeks leading up to the competition.

“Our team worked incredibly hard to prepare for the Purdue case competition, and to see our efforts being recognized and to yield the ultimate results was incredible,” Lombardo said. “It also gave us a chance to meet some really cool graduate students from other programs and connect with contacts from companies that were sponsoring the competition.”

This is not the first human resources case competition these students have won in 2019. Dixon, Everhart and Kellogg won the Ohio State Master of Human Resources Case Competition in February with fellow classmate now alumnus Will Overstreet. Kellogg said the three continuing teammates have learned a great deal about succession planning from the Moore School’s Center for Executive Succession and were deliberate in finding first years Lombardo and Upadhyaya to add to their strong case competition team.

“Once our summers ended, and the team was back on campus, we immediately dedicated ourselves to finding two fantastic first years to add on to the team to teach them the process and what it takes to compete at a high level in case competitions,” Kellogg said. “After winning this second case competition, [Lombardo and Upadhyaya] have all the tools, resources, and capabilities necessary to pass onto future MHR case competition teams.” 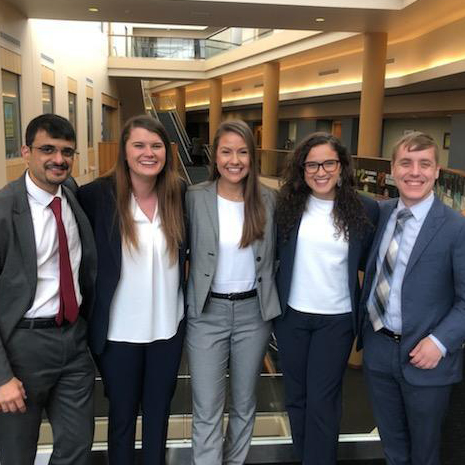 Learn more about the Master of Human Resources program