Williamson was featured in the April 2019 philanthropy-focused issue of “Biz New Orleans,” a locally owned trade publication in New Orleans. The feature detailed United Way’s plan to end poverty and Williamson’s involvement in the organization.

Williamson said this plan is extremely important in Louisiana; the state’s economy is ranked 49th in the U.S. with its fiscal stability at 43rd compared to the rest of the U.S., according to U.S. News & World Report. Louisiana is also ranked 50th for crime, opportunity and the environment; education is ranked 48th, health care 45th and infrastructure 48th. Williamson said all of the rankings indicate poverty is the central issue.

“While such rankings paint a grim picture of Louisiana, the state is, in fact, rich with natural resources, history and resilient people I would match with anywhere else in the world,” Williamson said. “But, generational poverty tends to mask that. Roughly one in two households struggle financially based on our most recent ALICE [Asset Limited Income Constrained Employed] Report. About 16 percent [of our region’s population lives] in poverty and another 30 percent or so [live just] above poverty but cannot make ends meet.”

Williamson said United Way’s plan to correct these circumstances is complex, but it focuses on improving education, health and economic opportunities — the root causes of poverty in Southeast Louisiana — for poverty-ridden individuals and families.

“[United Way is] working to influence the [poverty] narrative,” Williamson said. “Simply stated, we want more business leaders, policy makers and philanthropists talking about the root causes of poverty and determining how they might tie their social purpose and sustainability goals to our plan of ending it in our region.”

Williamson said good paying jobs are increasingly available in Louisiana, too. Individuals just need to be connected to these economic opportunities.

“We sit at the intersection of individuals and families that need a hand up and individuals and corporations that have that hand to offer,” he said. “When we bridge the gap between [poverty and employment], we will see an amazing transformation unheard of among poor Southern states.”

Williamson credits United Way for the beginning of his nonprofit service.

“I learned that United Way is an organization that could efficiently and effectively deliver on community solutions addressing our most pressing issues,” Williamson said. “Ultimately, I felt that United Way could be both a career and an opportunity to serve my community.”

Williamson uses his community connections to network on behalf of United Way. He said he frequently engages with other business leaders and philanthropists to positively change the region.

Through his education at the Moore School, Williamson said he developed soft skills like networking and relationship building.

“I believe my time within the Moore School allowed me to open my mind to new experiences and opportunities to learn and grow,” Williamson said. “I developed a point of view through my courses and studies.”

Williamson took the skills he learned from his Moore School marketing degree and the passion he had developed for United Way to become the organization’s chief operating officer in 2009 and was named CEO in June 2013.  He said he believes his job as CEO is to envision the organization’s future and then recruit the appropriate team and volunteers to achieve that vision.

“I literally have the power and obligation to positively improve the lives of tens of thousands of individuals and their families throughout Southeast Louisiana,” Williamson said.

As Williamson looks to the future of United Way and the Southeast Louisiana community, he encourages students to consider applying their business knowledge in the nonprofit sector to really make a difference in the lives of others.

His biggest advice to current Moore School students: “Have an open mind. Every moment presents a learning opportunity. Don’t be afraid take on challenges and step outside of your comfort zone. You might be surprised by what you learn about yourself. And remember, if it were easy, everyone would be doing it.” 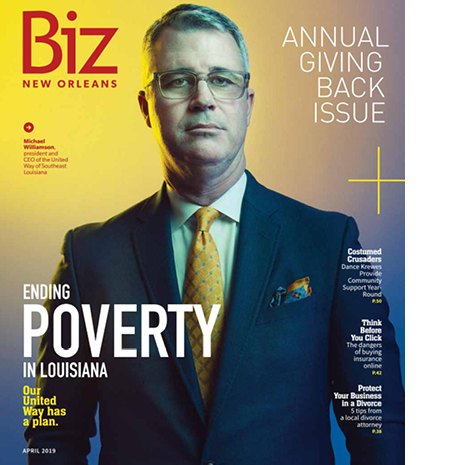 Moore School alumnus Michael Williamson ('90 marketing) is the CEO of United Way of Southeast Louisiana. He has come up with a plan to try to end poverty in Louisiana, which has one of the lowest rankings in the U.S. for its economy and fiscal stability.

Learn more about Michael's plan to end poverty in Louisiana.