The Moore School’s Folks Center for International Business drew a standing-room-only crowd for a recent discussion about Vladimir Putin and the future of Europe with Mitchell Orenstein, the chair and a professor for Russian and East European Studies at the University of Pennsylvania.

Sponsored by the Rachel and Jim Hodges Fund in collaboration with the Folks Center, the Walker Institute and the Rule of Law Collaborative, Orenstein’s presentation gave students and stakeholders firsthand interaction with one of the very top foreign policy strategists, said Gerry McDermott, a professor of international business at the Moore School. The Rachel and Jim Hodges Fund, given by Former South Carolina Governor Jim Hodges and the former First Lady, Rachel Hodges, brings renowned executives and scholars to the UofSC campus to examine current international trends. Hodges is also chair of the Folks Center board.

“The Folks Center is committed to examining key shifts in geo-politics that impact the evolution of markets, governance, risk and the transnational flow of goods and services,” McDermott said. “Orenstein is known far and wide as a luminary on the transformation of the post-communist countries in Europe and how this transformation impacts both the U.S. and the European Union.”

In addition to UofSC constituents, the general public is encouraged to attend events like the Orenstein debate to broaden attendees’ understanding of the new risks in markets and security posed by the recent wave of populist and autocratic leaders, McDermott said.

Focusing first on autocratic ruler Putin, Orenstein identified the risks Russia’s influence has on politics in the West during his time at the Moore School. A senior fellow at the Foreign Policy Research Institute, Orenstein shared the contents of his new book The Lands In Between: Russia vs. the West and the New Politics of Hybrid War. Robert Cox, director of the Walker Institute for International and Area Studies and a political science professor at UofSC, and Stanislav Markus, a Moore School professor of international business, provided some commentary on Orenstein’s analysis during the debate.

During his campus visit, Orenstein noted how his book can put the alleged Russian intervention into the 2016 U.S. presidential election and the recent controversies with Ukraine into a broader political context. Orenstein detailed the current hybrid war he said Russia and the West are engaged in and that it has high stakes for world politics. According to Orenstein, a hybrid war is one waged covertly through indirect means like deception, financing politically aligned factions and trying to spread incorrect information.

“For Russia, it could threaten the stability of the Putin regime. For the West, it threatens the stability of our political and security institutions and especially our alliances, weakening U.S. security from within,” he said. “Russia has pursued this war through disinformation, hacking, financing extremist parties and other asymmetric warfare techniques. The United States and European Union have responded primarily through economic sanctions. As a result, the hybrid or political conflict has only deepened.”

Orenstein said Russia feels threatened by Western democracy promotion, rule of law, economic integration and even the European Union and the North Atlantic Treaty Organization – essentially all the tenets of a true democracy.

While Orenstein sees Putin’s influence even farther reaching, he points to the Russian influences indicated in the Mueller report, which was the official U.S. investigation into the 2016 presidential election interference unveiled in March.

The Mueller Report “focused on disinformation and hacking. However, I suspect that we will learn, too, about Russian financing for political parties and candidates,” Orenstein said. “Russia delights in sowing chaos in the U.S. by compromising the president and causing him to [potentially] be impeached, for instance.”

Orenstein was researching a book about other countries’ problems with Russian influence and interventions in Moldova, Belarus, Greece, Bulgaria, France, the United Kingdom and others when the collusion was first suspected in the 2016 U.S. presidential election.

“In the most vulnerable countries, those countries that lie in between the European Union and Russia, I observed that hybrid war polarized country politics, but paradoxically also led to the rise of ‘balancers’ or ‘power brokers,’ politicians and business leaders who sought to profit from both sides of the conflict and the conflict itself,” he said. “People who realized that their own careers and wealth could be elevated by encouraging and taking payoffs and rents from the Russians and from the West. They have fascinating strategies that I illuminate in The Lands In Between: Russia vs. the West and the New Politics of Hybrid War.”

Orenstein said he was pleased with the thoughtful questions and comments shared by students, faculty and community members during his talk.

“I enjoyed speaking with the UofSC faculty and students, who asked tremendous questions and lived up to the reputation of having one of the best international business and international politics programs in the nation,” he said. “With such a lot of distinguished faculty, it is easy to see how students become so sophisticated by studying at South Carolina. I enjoyed the opportunity to share my expertise on Russia, the European Union and the lands in between with the UofSC community.” 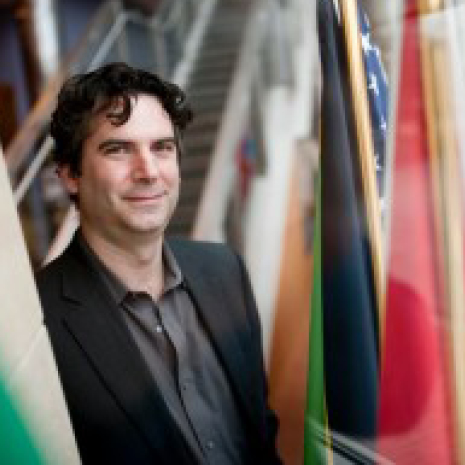 The Moore School and the Folks Center for International Business recently hosted a debate with Mitchell Orenstein, a Russian and East European Studies professor at the University of Pennsylvania. Orenstein's new book, The Lands In Between: Russia vs. the West and the New Politics of Hybrid War, details the alleged influence Russia had over the 2016 U.S. presidential election and the politicians trying to take advantage of the position of vulnerable countries between Russia and the West.

Learn more about Mitchell Orenstein and his research