Alumnus Myles Hilliard (B.S. ’16) is working on an app to ensure sports enthusiasts don’t miss a play while they’re waiting in long lines to buy concessions.

Hilliard, who majored in finance and risk management and insurance, is partnering with University of Iowa alums Will Anderson and Carson Goodale, who came up with the idea for the FanFood app in a University of Iowa entrepreneurship class.

“The idea came from an experience that Carson had when he attended a University of Iowa football game,” Hilliard said. “He missed a touchdown while standing in line at the concession stand.”

FanFood allows fans to order food and beverages directly from their smartphone, and the app will notify them when their order is ready for express pick up, or in some cases, will be delivered directly to their seat.

Hilliard and his team tested FanFood at a spring Founders Park Gamecocks baseball game and were in contract negotiations at press time to offer FanFood at future Gamecocks athletic events.

Hilliard originally worked for the Markel Corp. insurance and investment firm in Chicago after graduating from UofSC before joining the FanFood team full time earlier this year.

“My education at the Moore School provided a complex framework of business skills that allowed me to be a confident and intellectual young professional,” Hilliard said. “I learn something new every day, but my business acumen was originally crafted at the Moore School.”

While Hilliard would be excited to see the FanFood app at UofSC, his company’s success has begun to spread. The app is already in use at several colleges, high schools, minor league baseball stadiums and youth sports complexes around the country. 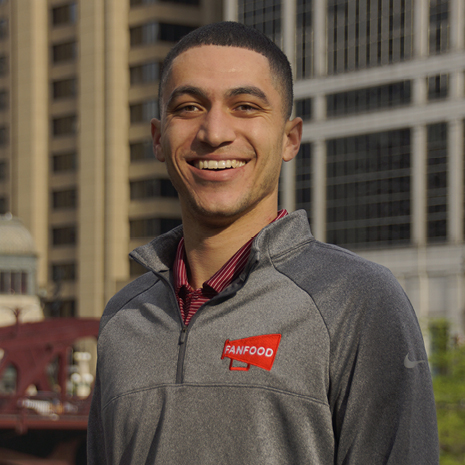 Moore School alumnus Myles Hilliard is working to bring his FanFood technology to stadiums and venues across the country. FanFood allows fans to order food from an app so they don't have to stand in long concession lines.