A recent UofSC grad and current doctoral student, Brooks Herring is working on a business plan for a program to help veterans be their best selves after possible injuries and mental health diagnoses. Earlier this year, Herring, a veteran himself, won the fan-favorite award from The Proving Ground for his RunPHASE veteran rehabilitation idea.

The Proving Ground is UofSC’s entrepreneurial competition to identify and accelerate innovative business concepts. It is a five-month, three-stage competition that culminates with a live-pitch event. The winners of the competition are judged by seasoned entrepreneurs, past applicants and winners of The Proving Ground, faculty, students and a live audience. Participants have the chance to win up to $17,500 in cash to invest in their business idea.

Now pursuing a doctorate in physical therapy at UofSC, Herring served in the Navy from 2005 to 2011 and deployed to Iraq and Africa and was an Army civilian from 2011 to 2013 and deployed to Afghanistan. Using his past experiences from the military to develop his business idea, Herring intends to use RunPHASE to help veterans who are recovering from combat trauma to “be at their best again.” Activities include physical therapy if needed, helping veterans get back to regular strength training and cardio despite disabilities and facilitating treatment for mental health concerns like post-traumatic stress disorder, depression and anxiety, common issues for combat veterans.

“The goal of the RunPHASE program is to provide the necessary tools for veterans to reach their physical and mental potential despite their injuries,” Herring said. “These men and women have put their lives on the line for [the United States], and in some cases, barely escaped with them. They’ve returned physically and mentally injured to such an extent that they aren’t able to move and exercise like they once did and worse – they have to deal with it without their unit, their closest friends. This is important because it is possible for a veteran recovering from combat trauma to reach his/her peak physical and mental potential, it just isn’t being facilitated.”

Herring decided to enter his idea for RunPHASE in the 2019 Proving Ground competition as he’s trying to build the business plan for it while attending school full time. He knew that the military and veteran communities were supportive of his service idea, but he did not know the response he would receive from a live audience at The Proving Ground. Herring gave a powerful and emotional presentation about his vision for the RunPHASE program.

“I know the audience could feel my emotion,” Herring said. “I hate to show it, but I know it comes out when I talk about RunPHASE because I’m so passionate about it. The message is deafening to anyone who hears it. We know this works; we know it’s needed for our veterans – someone just needs to do it.”

The RunPHASE project was awarded $5,000 from the Proving Ground audience through the fan favorite vote. Herring said he also received $5,000 from the American Infidels Veterans Motorcycle Club. This funding is helping RunPHASE to purchase a website domain and federally trademark its logo. Herring knows he needs additional funds and support to fully launch the program, but he is excited to take the initial steps while he continues developing his business plan, searching for funding sources and earning his degree.

As he reflected on his participation in The Proving Ground, Herring said the experience felt like confirmation of his business idea and veteran-support program.

“I know this is important to me, and I know it’s important for our veterans,” he said. “But this was the first time, on a large scale, that my passion and purpose was validated by a mixed audience – most of whom had no allegiance to me. They were genuinely moved, inspired and convinced that I should move forward with the program.”

The 33-year-old doctoral student is continuing to develop RunPHASE while also being a father to two sons and regularly performing as a solo singer/guitarist. Herring said he is working on research, recruitment, grant writing and program development for RunPHASE; he also hopes to integrate some of his RunPHASE work into his doctoral research project.

Herring hopes to launch RunPHASE in early 2022 after earning his doctoral degree in August 2021. 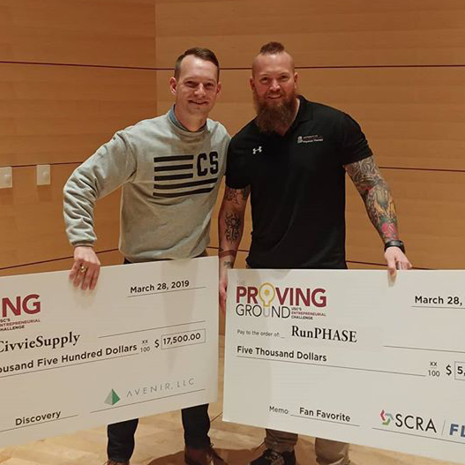 The Proving Ground now accepting applications for the 2020 competition

Do you have an entrepreneurial idea but need help formalizing your business plan and funds to get your venture started?

By entering The Proving Ground, you gain access to LivePlan, Palo Alto Software’s award-winning business plan software at a greatly reduced price and get assistance from the Small Business Development Center, whose mission is to advance South Carolina’s economic development by helping entrepreneurs grow successful businesses.

Submit your The Proving Ground business plan and application by Feb. 28, 2020.

Learn more and register for The Proving Ground