Rebuilding institutional capacity: the core solution to the COVID-19 crisis

At this stage in the COVID-19 crisis, citizens and politicians alike are asking how we can rejuvenate the economy and allow greater personal mobility while limiting the risks of exponentially increasing the number of infections and deaths.

Answers to this question have focused almost entirely on individual policies. We have devoted little, if any, attention to implementation. We have lost sight of the new roles that governments and other organizations at all levels must now play, and in doing so, we have neglected the important link between public health and economic activity. A massive, coordinated rebuilding of health care institutional capacity is the only way we can accelerate the return of economic growth while ensuring people’s health.

There is a fair amount of consensus on the central policies. For instance, former CDC Director Tom Frieden has advocated a four-point “Box It In” plan to test widely, isolate the infected, implement broad contact tracing and quarantine all exposed for two weeks. Former World Bank president Jim Yong Kim offers a similar strategy with the addition of treatment.

Each of these requires coordinated mobilization and allocation of resources – both human and material. Such coordination is precisely the role of institutions, ranging from local, state and national government agencies to public-private consortia and civil society groups such as non-governmental organizations, business associations and unions. Robust institutional capacity brings the key public and private actors together to achieve a common goal, in this case, saving citizens’ lives and getting the country back on its feet. This is a daunting task, but it ensures greater efficiency and public trust.

For example, implementing anything like Frieden’s four-point plan must resolve a trifecta of

collective challenges: massive scale, intense time pressures and a complexity of interconnected actions and information. Under these conditions, market signals and voluntary codes of conduct do not function well. Indeed, simply relying on individual firms or states to find solutions on their own is misguided and potentially dangerous.

First, in the short term, state governments, hospitals and individuals will try to outbid each other for key resources, like masks, ventilators, swabs and test chemicals, which drives up prices and gets them to only the richest entities. This puts at great risk poorer and densely populated communities and then the rest of the population since the virus would still spread. Such shortages create even greater panics.

Second, market signals will then not help shift resources fast enough to where they are needed. While firms are good at meeting stable demand, they are reluctant to invest much time and money in drastically shifting or increasing their output of goods for demand that will probably go down as the pandemic abates. Finally, markets do not necessarily provide accurate and timely information, especially in uncertain environments, about risks, best practices and key areas of demand based on need as opposed to capacity to pay.

Given these problems, government, whether at local, state or national levels, must be an active leader and coordinator. National government agencies have the unique powers and resources to cut through the aforementioned problems. This can involve mandating and subsidizing the rapid production and delivery of key products, such as test materials, as well as providing unified, timely, evidence-based information on risks and best practices. More often, it means accelerating vital coordination among non-governmental organizations, such as hospital systems, firms and laboratories. But without strong coordination, each agency, group and firm will be left to fight over scarce resources.

This attention to institutional capacities with significant government backing versus just a few policies can largely explain the relative successes of South Korea and Taiwan. These countries did implement the policies that Frieden and others advocate. But their secret was strategic planning and decision making led by unified government agencies, involving health and drug companies, as well as frontline hospitals. These government-led networks were able to rapidly channel the vital resources and information to hot spots to identify and contain the networks of the infected.

The agencies created a framework with the private sector to coordinate the distribution of critical goods, including when the South Korean government worked with the Incheon Pharmaceutical Association to stay open on Sundays and carry out a specific strategy of mask distribution. They also succeeded in incentivizing firms to innovate in the production of needed drugs. It is, indeed, no surprise that South Korean firms are among the very few world leaders right now in the creation of rapid, large-scale virus and antibody tests. Similarly, German federal and state agencies work closely with scientific institutes and various corporations to create the supplies and diagnostic plan to aggressively test the population for antibodies to the coronavirus.

The United States can learn from these cases, not only for their science or testing techniques but particularly in their mechanisms for helping the public and private actors work together effectively. While the U.S. is much larger than most countries, Germany also has the diversity of federal and state jurisdictions. This creates opportunities for local innovation but also for fragmentation and dog-eat-dog competition. Even more problematic is that we’re behind the institutional eight-ball, given the prior underfunding of public health and vacancies in key government agencies. Hence, a rapid, coordinated, coherent rebuilding of our institutional capacities in health care will accelerate our management of the virus, the return of economic growth and a renewal of public trust in our future.

by Gerald McDermott, professor of international business at the Darla Moore School of Business and faculty director of the Folks Center for International Business, and Richard Doner, Goodrich C. White Professor Emeritus of political science at Emory University 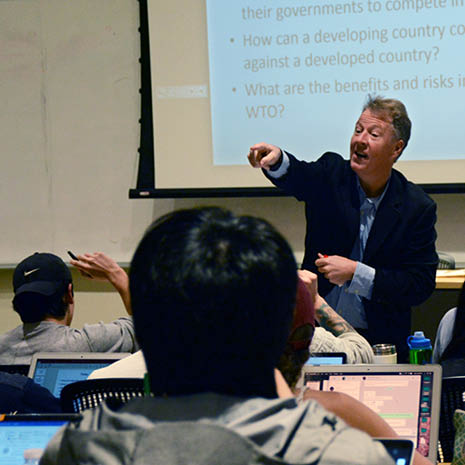 International business professor Gerald McDermott and his colleague from the Emory University political science department have suggestions for how the United States can begin to recover from the COVID-19 pandemic. McDermott is also the faculty director for the Folks Center for International Business.

Learn more about the Folks Center for International Business