Three International Business and Chinese Enterprise cohort program alumni were recently named among the Forbes 30 under 30 in Asia.

Chester Szeen (’16 IBCE) and Teresa Chan (’18 IBCE) were recognized for their efforts to build Mellow, a personal finance and digital payment solution for parents to develop healthy money habits for kids ages 6-18.

“Through a kid-parent app and a prepaid card for kids, kids form their saving, spending and earning habits through real-life practices,” Szeen said. “The problem of bad money habits is extremely common. It was a personal pain that we went through as well. In college, many of our friends first started to handle their own income and become self-dependent after graduation.

“Yet, many did not have the right habit like budgeting realistically and spending mindfully – it was a pain to learn it at such a late stage. Money habits form during childhood, yet traditional solutions are short-term, non-practical and non-habitual. Mellow wants to change this approach.”

Szeen said being among Forbes 30 under 30 in Asia is motivating for his and Chan’s growing company.

“Considering how we just started working full time on the company about a year and a half ago, and looking back at what we’ve achieved, we’re thrilled to be included to the list of amazing people who are changing the world in various fields,” Szeen said.

Szeen and Chan credit the Moore School’s International Business and Chinese Enterprise cohort program with giving them the tools they needed to begin a successful company.

“Being an entrepreneur, especially in the early stage, is about being a jack of all trades and doing everything in the company,” Szeen said. “Studying within the IBCE program helped us build the essential business skills in different fields to be able to [launch and grow Mellow].”

While based out of Hong Kong, Szeen and Chan said they never questioned expanding their entrepreneurial venture beyond China, thanks in part to the global mindset they said they gained as part of the IBCE program.

“The concept of going international seemed very natural to us, which we later learned that not all entrepreneurs have the same global vision,” Szeen said. “The IBCE program taught us to take opportunities and challenge ourselves, and it’s partially why we already decided to do entrepreneurship at such an early career stage.”

Their plans for Mellow include expanding to more regions outside of Hong Kong to make financial literacy accessible to more families.

Also included in the Forbes 30 under 30 in Asia, Winnie Lee (’16 IBCE) was acknowledged for her company, Spread-it. A collaboration between Lee and her co-founder, Timothy Ng, Spread-it is a micro-influencer marketing platform that matches companies with suitable social media personalities to help promote marketing campaigns, according to their profile on Forbes’ website.

“Spread-It is an influencer marketing platform; imagine it's like Uber for Instagram users — as long as you own a social media account, you can join the app, participate in campaigns and earn money from it,” Lee said. “Back in 2016, there were a lot of brands who wanted to reach out to university students but couldn’t find a suitable channel. Therefore, we brainstormed what if the brands directly spend their marketing budget on these university students' social media?”

Working out of Hong Kong, Spread-it has worked with more than 500 brands, including McDonald’s, Clinique cosmetics and H&M.

Launching Spread-It to notable companies, Lee said the International Business and Chinese Enterprise cohort program taught her how to make deals with various organizations and provided a broadened horizon for evaluating and growing a business.

“Global expansion is important; there are some case studies that we took in our IBCE courses that reference how a business grows, so those were very useful as well,” she said.

Spread-It’s next steps include expanding beyond Asia and diversifying their product offerings. 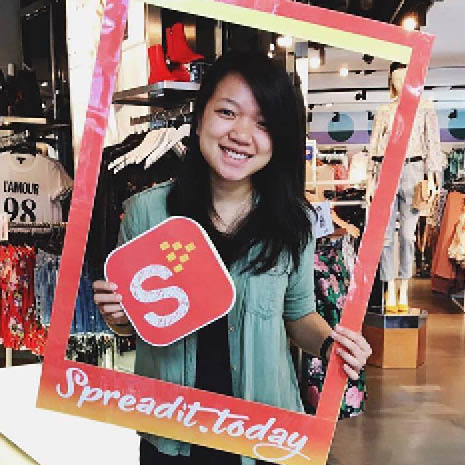 Three IBCE alumni on Forbes 30 under 30 in Asia list

International Business and Chinese Enterprise cohort program alumni Teresa Chan, Winnie Lee and Chester Szeen were recognized by Forbes for their companies' entreprenurial innovations. The three alumni credit part of their success as business innovators to their time in the IBCE cohort program.

The IBCE cohort program is an intensive four-year international business and overseas study experience that educates future global leaders and imparts the skills necessary to contribute to organizations and enterprises in North American and Chinese business contexts. The program is a partnership between the Moore School and the Chinese University of Hong Kong. Students in the program spend a full academic year at each others' institutions, sharing coursework and experiential learning opportunities.