The University of South Carolina College of Social Work recently celebrated 50 years of improving the lives and well-being of people in South Carolina and beyond.

Two alumni and a faculty member are among the many who are continuing that trend through their degrees in social work.

Master of Social Work graduate Patrick Patterson has worked in the George W. Bush and Obama administrations, traveled to multiple countries and owns a business — all examples of the unexpected places a degree in social work can take you. 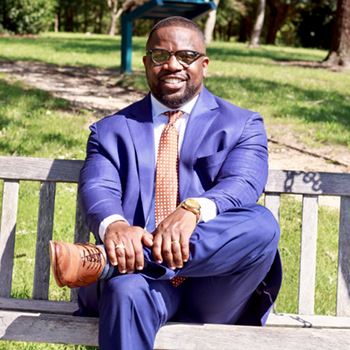 Patrick Patterson earned his Master of Social Work from UofSC.

“Social work goes back to my upbringing. When I got to college, it was the field of choice for me because it aligned with who I was,” says Patterson, who was an undergraduate at Benedict College.

“I’d only had black classmates before graduate school,” he says. “So, when I got to USC it was a bit of a culture shock. I challenged myself and I grew tremendously. My affinity for USC is strong.”

While at South Carolina, Patterson also continued his work promoting and supporting fatherhood, a work he would later become known for and that would eventually lead him to the White House.

When he graduated, Patterson worked with Sisters of Charity for a statewide program promoting fatherhood, directly impacting fathers and families in the state.

“For 3 1/2 years I did nothing but assist and encourage fathers in the state of South Carolina,” he says.

While in that position, Patterson met Bush, who offered him a position as manager for national initiatives (the National Healthy Marriage Resource Center) in Washington, D.C. He continued under the Obama administration in the National Responsible Fatherhood Clearinghouse.

In recent years, he has returned to the university to speak with social work students about the various career paths a social work degree can provide. He says he hopes to give them a new viewpoint of what students can do and the impact they can have.

“For four years I’ve been working in the NFL with fathers,” he says. “I’ve traveled the country training organizations, speaking to dads in prisons, in schools. That’s not why I thought I would get my degree. … I hope to give students some perspective. If you are passionate about something, pursue it.”

I hope (students) have the confidence and skills to go out and lead change and to do that in a way that helps to raise up the voices of groups who don’t necessarily have excellent representation.

Like Patterson, a community need spurred Christina Andrews’ interest in the field.