After a career as a violinist, music teacher and data analyst for Disney, Moore School Ph.D. candidate Caitlin Ray realized her passion for academia and decided to pursue her Ph.D. in business administration to one day hopefully secure a tenured faculty position.

Ray said she has always appreciated autonomy in her work. In her early twenties, she frequently changed jobs and traveled often.

In her early professional years, Ray decided to be a music teacher for elementary and middle school students after an arm injury ended her aspiring professional career as a violinist. Ray thought teaching was a logical next step in her career path. However, Ray reflected on her K-12 teaching experience and realized she felt limited in the amount of discretion she had in her classroom, so she decided to return to school herself.

After obtaining her MBA, Ray was hired by The Walt Disney Company where she was responsible for analyzing and simplifying complicated data for top-level sales and marketing executives.

Ray said the skills she learned through this role were important because she learned how to simplify complex problems and how to use data analysis software, skills she would later apply to her Ph.D. coursework. Although she had more flexibility in this role at Disney, Ray decided again to obtain a higher degree, this time in a more permanent capacity.

“I chose to pursue a Ph.D. program as a way to transition into a career as an academic,” Ray said. “The flexibility of [a professor position] is something that is very appealing to me as someone who wants balance – a fulfilling career but also a fulfilling private life.”

Choosing a Ph.D. concentration was difficult for Ray; she said luck and instinct played a large role in her decision. Ray said she reflected on her time at corporate Disney when applying to doctoral programs.

“During my time [at Disney], it became clear to me that my interest was in how people interact with their organizations and vice versa,” Ray said

She also said she researched professors in each concentration at the universities where she was applying to find research topics that aligned with her interests.

With some internal reflection and thorough research, Ray decided to concentrate her business administration doctorate in organizational behavior and human resources at the University of South Carolina.

“I knew that I could solve real-world problems by studying how individuals interact with their organizations,” Ray said. “Plus, I would never get bored because there is a lot to learn."

Ray said she was drawn to the Moore School not only because of the concentration and research opportunities but also because of its geographic location, the structure of the Ph.D. program and the quality of the professors.

“The [Moore School Ph.D.] program is unique in that there is a balance of research and course work from the first day, which is one thing I found unique and attractive about the structure,” Ray said. “The quality of the professors and their accessibility to Ph.D. students is really special here. They are some of the most intelligent and available professionals I have ever met, and they made me feel incredibly wanted and welcome in my communications with them.”

Having the opportunity to make her own schedule and hours is something Ray enjoys about her position as a Moore School Ph.D. student. She said she also enjoys the ability to work with friendly and intelligent peers and a wide variety of professors.

“It makes each day enjoyable, and you are really allowed to pursue your own interests and path, which at first is overwhelming, but it is also an incredible opportunity which you don't have in any other career field,” Ray said.

She said that time management and organization skills are the most valuable tools she has learned from the Moore School so far. She also said she has learned how to use sophisticated statistical tools like Mendeley, Business Source Complete and Excel.

After she finishes the Ph.D. program in 2023, Ray hopes to achieve eventual tenure, see more of the world and one day get married and start a family.

“The great thing about this program is that it provides opportunities, but what you want to do with those opportunities is an individual preference as each person's journey is their own,” Ray said. “It is exciting but also overwhelming at times.”

As she returns to academia, Ray reminds others that they are the only limit to their own success.

“I had a fairly unique path getting here, which I think is sometimes comforting to people who feel that they didn't always do things the ‘right’ way,” she said. “Thankfully, there is no ‘right’ way. As long as you are willing to work hard and are curious, I have found that there will be a path for you.” 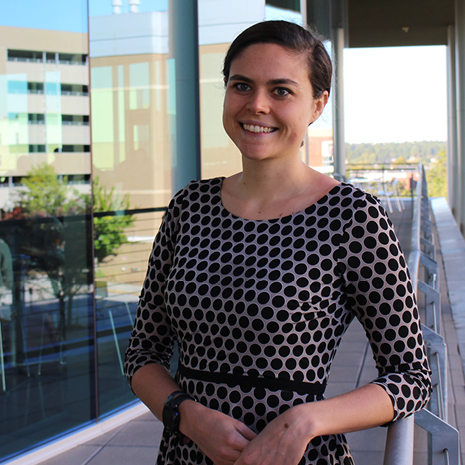