Her turn at bat

If you want to make the big leagues, sitting back and waiting for an opportunity to come to you isn’t going to cut it. You have to work for it, whether you want to be a player, coach, or management professional. University of South Carolina senior Regan Durham learned that lesson early, and as a result, she will start the 2019 season as a minor league video coaching intern for the Minnesota Twins.

“There was never an application for this job. I got it through networking,” says Durham, who has already started work with the Twins and will take a weekend off to return to Columbia for commencement in May. “I talked to whoever would give me the time of day.”

Durham, a sport and entertainment management major, grew up around baseball. She got her first job in the game at 16, with the minor league team in Greenville, South Carolina. She has always been aware that baseball’s management positions have traditionally been held by men, and determined not to let that stop her.

Major League Baseball has recognized the need for change, and created the Take the Field program designed to provide training and employment opportunities for women pursuing careers in areas traditionally dominated by men.

"We have to look at what platforms we are giving to give more women exposure to decision-makers in our game, and close whatever the perceived gaps are, to make sure they are competitive," Renee Tirado, MLB's chief diversity and inclusion officer, told MLB.com. "And we need to ensure they are actually getting opportunities to work in our game, at some capacity — at a minimum, to get them into the pipeline, to get exposure."

“There was never an application for this job. I got it through networking. I talked to whoever would give me the time of day.”

The program had only 50 openings this year, and Durham made the cut. She attended the Take the Field program in December 2018 during the MLB Winter Meetings in Las Vegas. The senior had already secured job interviews with five teams in preparation for graduation, but the program helped her land a sixth and become even more prepared. It included speakers and panels on breaking into the game, resume building, networking and mock interviews.

It also gave her a chance to meet with MLB executives as well as other women who, like her, want to step through the doors that once were closed.

Durham went on from the program to her interviews, accepting the offer from the Twins for a season-long internship, while she fulfills the last requirement for her degree from South Carolina and gets her foot in the door.

Arriving at spring training to begin the job, she found there are more women breaking into baseball than she expected.

“It was kind of eye-opening to see I was not the only one,” Durham says. She has also found that the players and male coaches and management are embracing the change. “I’ve been surprised that people are not surprised. I’ve been welcomed much more than I expected to be.”

Durham says the Department of Sport and Entertainment faculty and Gamecock Athletics staff at South Carolina encouraged her throughout her time as an undergraduate student, mentioning Coordinator of Baseball Administration / Director of Player Development Stuart Lake as a particular influence.

The opportunity to be in classes taught by Susan O’Malley, the first woman to be president of a professional sports franchise, was also important to her.

“She is someone I idolized,” Durham says.

Durham is not yet certain where she wants to go in her career in baseball. Scouting and player development currently appeals to her, but she knows that could change as she gains experience.

“The game is evolving so fast,” she says. “I very well may want to do something that doesn’t exist yet.”

Whatever that thing may be, Durham will be prepared for it. She is ready to work as hard as it takes, and determined to make it to the top. 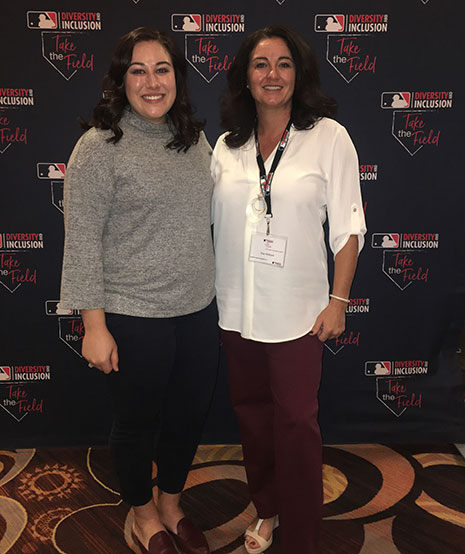 Regan Durham (left) and Gamecock alumna Christina Whitlock both participated in the MLB Take the Field event. Major League Baseball has recognized the need for diversity in its ranks, and created the Take the Field program designed to provide training and employment opportunities for women pursuing careers in areas traditionally dominated by men.