The return of March Madness brought the national spotlight to Columbia. For dozens of University of South Carolina students, it also brought a chance to work behind the scenes and experience the NCAA Men’s Basketball Tournament firsthand.

“I would never think I would enjoy working an 18-hour or even a 12-hour shift, but both of them were genuinely fun,” says Micayla Sullivan, who worked at Colonial Life Arena. “My favorite part of the event was getting to watch the last two minutes of the Duke vs. UCF game from the tunnel. The energy in that arena was different than anything I have ever experienced, and I will never forget that feeling.”

“This is a once in a lifetime opportunity for these students,” says South Carolina Athletics Event Management and Operations Manager Richard Bouknight. “You’re talking high level basketball and a huge operation. This is a big deal.”

Bouknight helped coordinate a partnership between Athletics and the South Carolina Department of Sport and Entertainment Management, allowing more than 40 students to work at the tournament.

The opportunities for sport and entertainment management students didn’t stop there. Faculty from across the department maximized access to hands-on learning experience for students. Professor Tom Regan recruited students to help conduct research on the economic impact of the tournament. Adjunct instructor and Colonial Life Arena General Manager Sid Kenyon invited students from his class to work at the arena during the tournament and integrated first-hand, real world lessons from the tournament into the curriculum.

Students across campus, from retailing to public relations, also landed jobs working many of the events around the city during the tournament weekend. Others took part in class visits to Colonial Life Arena to see the operation, led by professors including Matt Brown, John Grady and Haylee Mercado.

It was much more than just work for me. I feel like I made some connections with new people that will hopefully help me in my academic and professional future.

Christina Older, a student in Kenyon’s class, says she has worked at Colonial Life Arena before, but this was an entirely different ballgame.

“The NCAA has more rules. It was stricter as far as policies and the roles we had were very particular,” Older says. “I believe that was so that we could focus on one role, as it was important to keep everything smooth rolling and professional.”

Bouknight says the tournament is unique in its size and scope, and thus a new and different experience even for students who have worked at other major events, and an opportunity for them to impress people who could be important to their careers.

“This was a great way for campus to partner with athletics to put on a large-scale event. We took it very seriously when we were screening students,” he says. “This is in no way a one-way street. I told the students ‘Do a great job and you can put me down as a reference. I’ll call whoever I need to call and do whatever I can to help you.’”

Sullivan says the opportunity had a definite impact on her mindset and future plans.

“It was much more than just work for me,” she says. “I feel like I made some connections with new people that will hopefully help me in my academic and professional future. I am still figuring out what I want to do and realized after that weekend, I could see myself in sports. The entire experience was amazing. Exhausting, but amazing nevertheless.” 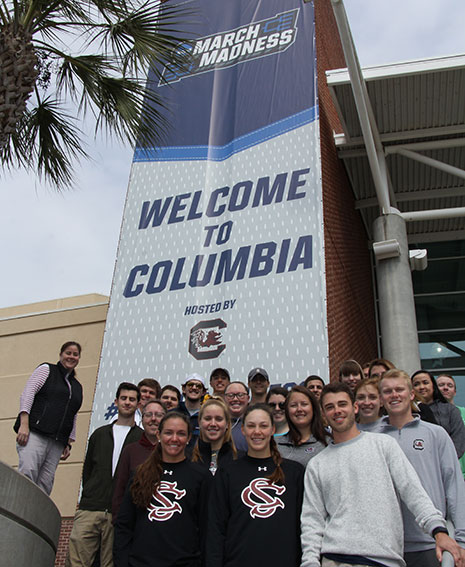 UOFSC IN THE NATIONAL SPOTLIGHT

Students across campus, from retailing to public relations, landed jobs working many of the events around the city during the tournament weekend. Others took part in class visits to Colonial Life Arena to see the operation, led by professors including Matt Brown, John Grady and Haylee Mercado.