From Career Change to Championship

It’s never too late to change direction and follow your passion. Jonathan Hampton (“Hamp” to his friends) took a big risk as he neared the end of his time as an undergraduate student at the University of South Carolina. It paid off with a master’s degree, a chance to play an important role with a national championship team and a bright future ahead.

Hampton, an Orangeburg native, was planning to become a music teacher and earned a bachelor’s degree in music education from South Carolina in 2020. All along, however, he also had a love for sports. He played sousaphone in the pep band, but also played a lot of basketball, eventually trying out and being chosen for the Gamecock women’s basketball practice team, a group of male students who volunteer to serve as scrimmage opponents.

As his undergraduate graduation approached, he began realizing that while he still loved music, his future was in sports.

“I was student teaching and it was almost time for class and I was on my phone looking at stats for a game that had absolutely nothing to do with me,” Hampton says with a laugh. “So I started wondering, if I’m this passionate about sports the way I probably should be about lesson plans, maybe I should consider the whole thing.”

He went to South Carolina Director of Women’s Basketball Operations Cynthia Jordan and asked if she could find a position for him. She initially did not have one, but two weeks later told him there was a possibility, if he could get into a graduate program.

“I said ‘Yes, of course I can,’ just betting on myself. I knew I’d find a way,” Hampton says. “At that point I didn’t even know that our sport and entertainment management program was ranked number one.”

Hampton met with Tom Regan, then the director of graduate studies for the university’s Department of Sport and Entertainment Management. Regan offered Hampton a chance, but told him he should expect a lot of hard work.

“I told him that was fine, that I don’t run from work, but I just wanted to know if I was going to get something out of this degree,” Hampton says. “And Dr. Regan said ‘Yes, you’re going to get everything you want out of this program.’ And with that it was wheels up.”

Hampton became an outstanding student, and also earned a graduate position with the Gamecocks’ women’s basketball team, learning under legendary coach Dawn Staley and being part of the 2022 national championship.

"Having Hamp around our program is a constant jolt of energy whenever you might need it. In practices, you can hear him constantly communicating and celebrating big plays. His passion for what he does is infectious, and that attitude will carry him wherever he wants to go in his career and in his life," Staley says.

Hampton’s grad assistant duties included handling logistics for team travel, managing equipment inventory, helping prepare for practices and games, as well as learning the countless other details that go into keeping a champion collegiate sports program at the top of its game. He says it was a rare privilege to learn from a woman who has reached the absolute pinnacle in her profession.

“She’s one of the most giving people,” Hampton says of Staley. “She gives you the freedom to explore what you're great at. She isn't inhibiting, she isn't limiting. And for all her success, she’s the same person I met way back in 2015, my first year. She came to talk to the band kids and I'm pretty sure she had no idea where one of those band kids would end up.”

“If it wasn't for him being there as much as he's been there, I think this grad school experience wouldn't have been as remarkable as it has been,” Hampton says.

Hampton laughs when asked which of the Department of Sport and Entertainment Management faculty have been especially helpful and influential as he pursued his master’s degree and carved a new career path for himself. 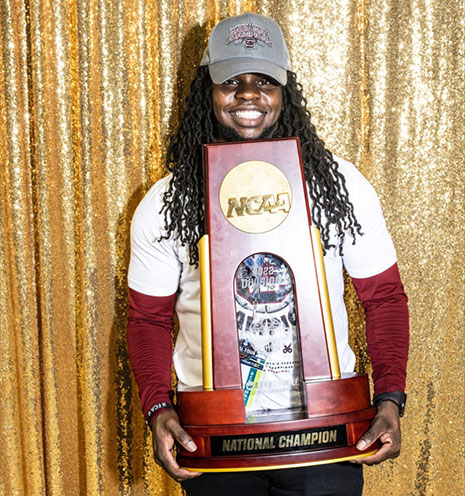 As his undergraduate graduation approached, “Hamp” Hampton began realizing that while he loved music, his future was in sports.