The first year of college can be a challenge for anyone. However, University of South Carolina College of Hospitality, Retail and Sport Management freshman Madalyn Hair may have arrived more prepared than most, thanks to a high school career which included four Ice Skating Institute (ISI) world championship wins.

"Skating has definitely taught me quite literally when you fall down you have to get back up, and I apply that every day,” she said. “If there's something on the academic side that I didn't do so well on or I failed at, I do have to get back up. You can't give up."

Hair’s skating career began when she was 9 and looking for a place to have her birthday party. Her mother suggested an ice skating rink, and as Hair put it, "We went and that was it, that was the end of it."

She moved to group lessons first, then as her love for the sport grew and her talent became obvious, she began working with a private instructor. She competed in local and regional competitions, then made her debut at the ISI World Recreational Team Championships in 2012.

Skating has definitely taught me quite literally when you fall down you have to get back up, and I apply that every day.

Competing against more than 1,400 other skaters from all over the world, Hair claimed two championship wins in 2012 and two more in 2014. In 2014, her overall individual scores topped the total scores of 28 teams.

Her victories are all the more impressive for an Horry County, South Carolina native who now lives in Irmo: neither being locations known for winter sports. "It's kind of unheard of," she said.

Hair was ready to take a step back from ice skating when she began looking at possible college destinations. UofSC, where her mother works as program coordinator for graduate studies at the School of Music, was a natural fit. However, more than family ties led Hair to become a Gamecock.

"I was really attracted to the fashion program here," she said. "I've always been interested in fashion. At ages 3 and 4 I was picking out my outfits."

That interest was bolstered by her years of skating, with the sport’s fantastic costumes, and by her ventures into modeling starting when she was 15. "It's a very interesting industry to be a part of,” she said of modeling and its close connection to fashion. "It's definitely a big networking tool."

Hair is majoring in retailing with a concentration in fashion merchandising. She said she has not yet decided what career to pursue within the fashion world, saying she has enjoyed every part she’s seen of an industry which also fits her personality.

"I come across to a lot of people as really shy,” she said. “I don't necessarily like to talk a lot. For me when I first see someone I kind of notice what they're wearing. Clothing kind of says who you are without having to speak, so I that really resonated with me."

Hair said the discipline she learned in years of attending long skating practices while still needing to get schoolwork done has paid off for her as a freshman.

"I do like that I have a little bit more time to do what I want,” she said. "I think I'm adapting very well. It's very different from high school, but I think I'm molding well." 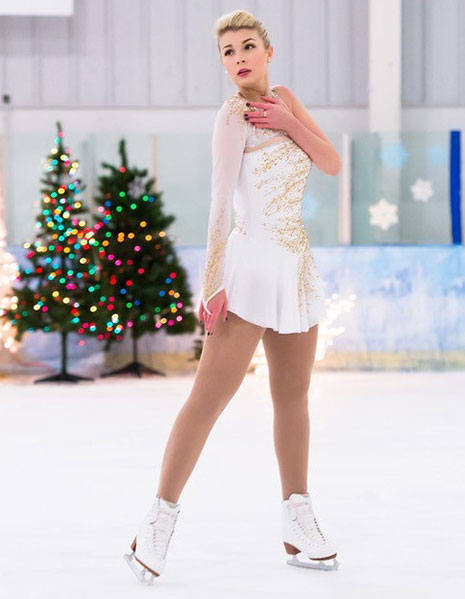 Lessons learned while winning four ice skating world championships helped prepare Madalyn Hair for success in her freshman year at UofSC as she works toward a career in fashion.