Sej Harman served University of South Carolina’s College of Hospitality, Retail and Sport Management (HRSM) as an invaluable employee for 35 years — leading the college forward from behind the scenes and making life-long friendships along the way. The college community was deeply saddened to learn of Sej’s passing on May 29, 2017, and remembers the lasting impact she had on the college and those who knew her.

Sej (her full name was Sarah Josephine, but even family rarely used it) was born December 10, 1948. She attended Columbia schools, graduated from Erskine College and pursued a career in Information Sciences. She keyed, proofread, and edited manuscripts ranging from short stories she authored to academic references to novels and stories of Fred Miller.

Arriving at HRSM (then known as the College of General Studies) in the early 1970s, Sej quickly became an integral part of the college. She came to HRSM as an administrative professional and helped move the college from typewriters to word processors in the 1980s. She then ran the word processing center, helping faculty in too many ways to be counted. She rose through the ranks and eventually served as student services coordinator for the college for several years.

“Sej would actually type our tests, papers that needed to be sent out for reviews, and class materials,” said Sallie Boggs, senior instructor in Retailing at HRSM. “She spent hours at her desk working on materials for the faculty, yet I never saw her in a bad mood and never heard her complain. Rather, she always had a smile on her face and a great attitude, eager to help in any way.”

“Sej was open to all ideas, welcoming to all people (and animals) and cared for the world as if it were her child. In her honor, please extend a helping hand to someone in need, create a beautiful work of art, embrace your loved ones, recycle or reuse materials that you have, take a dog for a walk, or simply enjoy the beauty of the earth.”

Boggs spoke for many who knew Sej when she added “My lasting memory of Sej will be of her seated at her computer, looking up and greeting me with a smile, even though I was carrying a huge pile of papers that were getting ready to land on her counter. That image of her will remain tucked in my heart.”

“We ran a program for talented and gifted middle school students from 1980-1992 in the college and I was the director. Sej was the staff person who made it all happen. We ran three two-week sessions each summer with about 80 students per session. Sej knew each one of them by the time they arrived on campus. She had seen and processed their applications and responded to many of their inquiries. I invited Sej to the final banquet which we held on the last Friday night of a session, and she was in heaven as she went among the students, meeting them in person and listening to their stories about their adventures.”

After retiring from HRSM in 2008, Sej continued to serve, dedicating herself to her community. She volunteered with The League of Women's Voters, Faith Coalition on Gun Violence, USC Women's Group, Funeral Consumers Alliance, the George Rogers Foundation, Traumatic Brain Injury Group, The Workshop Theater and The Town Theater, as well as in numerous capacities with the Unitarian Universalist Congregation of Columbia, of which she was an avid and active member.

“Sej was very, very special to me and my family (and to so many others too), and she dedicated the bulk of her life to this college and this university,” said Tina Weaver, HRSM director of alumni and external relations. “Sej is the one who saved so many things, she was an archivist for the college and was instrumental in putting together our 50th anniversary timeline. She was an important part of our college’s history and made sure that our history was captured and shared for generations to come.”

Sej’s family asked, in a statement, that she be remembered in a way she would certainly have liked. “Sej was open to all ideas, welcoming to all people (and animals) and cared for the world as if it were her child. In her honor, please extend a helping hand to someone in need, create a beautiful work of art, embrace your loved ones, recycle or reuse materials that you have, take a dog for a walk, or simply enjoy the beauty of the earth.” 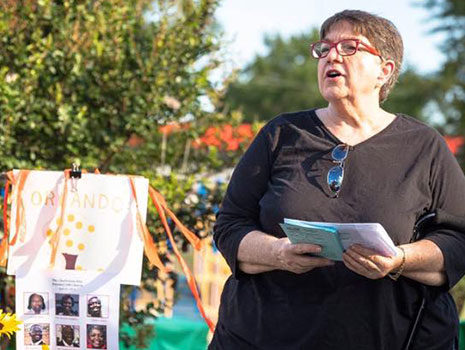 After retiring from HRSM in 2008, Sej Harman continued to serve, dedicating herself to her community.