Veshannah Lovelace has spent almost half her life serving her country, and her passion for leadership and new challenges has prepared her for a new career in her civilian life. After 20 years of service, the Army veteran returned to school and graduated with her master’s degree from the University of South Carolina in May 2018.

“The Army didn’t coddle me. It taught me leadership, being able to see people’s strengths and organize them as a team,” she says.

Lovelace earned her bachelor’s degree at Norfolk State more than two decades ago, completing it in just three years with the goal of going on to film school. However, with degree in hand, she felt the need to experience more and chose to join the Army as a photographer and videographer, known as a combat camera soldier.

Do both she did: Lovelace made 25 jumps as a soldier (in addition to three during training). She served all over the world, including a tour of duty in Iraq in 2007. She added journalism, public affairs and event planning to her growing list of skills.
She retired from the Army after 20 years of service, and as that milestone approached, she planned her next step. She had enjoyed having event planning among her many duties, and when she looked into careers in that area, something clicked.

“My stomach fluttered and I knew that was it,” she says. She began looking into graduate school options, and heard about the Master of International Hospitality and Tourism Management degree program at University of South Carolina’s College of Hospitality and Sport Management. She planned a visit to Columbia and after meeting with the faculty, she knew she had found the perfect fit.

USC has an excellent program. I think I would have loved it as an undergrad too. I got a lot of practical experience, and I loved that the professors had so much real-world experience too.

"USC has an excellent program. I think I would have loved it as an undergrad too. I got a lot of practical experience, and I loved that the professors had so much real-world experience too," Lovelace says.

The leadership skills learned in the Army served her well at UofSC and made it easier for her to step comfortably back into the role of a college student.
She became a leader in many group projects and joined student organizations including CMA EDU (part of the Country Music Association) and the UofSC chapter of the National Society for Minorities in Hospitality. She also took advantage of opportunities to learn beyond the classroom by taking the Theme Park and Attraction Experience Maymester course, which travels behind the scenes at Disney World and other parks.

While not every class can include rollercoasters, some classes she didn’t necessarily expect to enjoy became some of her favorites, like Professor Kevin Ayres’ finance class and Professor Sporty Jeralds’ venue management class.
“It was so hands-on, so practical,” she says. “I even got a job offer based on one of my projects.”

Her life has taken many a twist and turn, but Lovelace has found one lesson learned early on and reinforced in the Army to be particularly important.
“Have a plan and be focused. The plan may change, but you always start with the end in mind.” 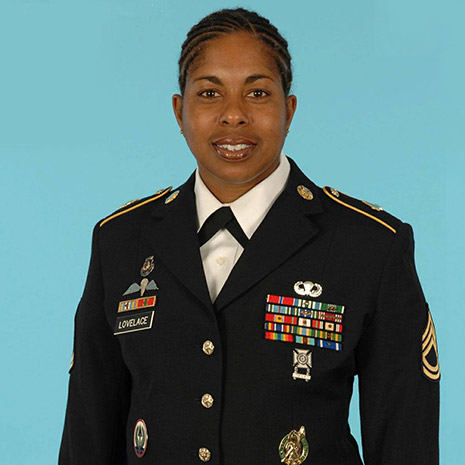 After a 20-year career serving in the Army, Lovelace took on a new challenge by returning to school and earning her Master of International Hospitality and Tourism Management degree from the University of South Carolina.