The Sport Entertainment and Venues Tomorrow (SEVT) Conference honored two outstanding leaders in the field of sport and entertainment management at its annual awards luncheon November 15, 2018 in Columbia, South Carolina.

SEVT is hosted by the University of South Carolina’s Department of Sport and Entertainment Management. The event brings together industry executives, teachers and students from across the country to drive innovation and map the future of the sport, entertainment and venue management industries. 2018 marks the 21st anniversary of the conference.

Daniel Mahony had a long and distinguished career in the academic side of sport and entertainment management before becoming president at Winthrop in 2015. As an administrator, he continues to stay up to date with the field.

Before coming to Winthrop, he served for seven years as a professor of sport management at Kent State University in Ohio, and 13 years at the University of Louisville. In his current role, he team-teaches a course called History and Current Issues of College Athletics with Winthrop Athletics Director Ken Halpin.

Mahony earned a B.S. in accounting from Virginia Tech, an M.S. in sport management from West Virginia University, and a Ph.D. in sport management from Ohio State University. He is an active researcher in the areas of sport consumer behavior and intercollegiate athletics and has published more than 60 articles in various refereed journals, several book chapters, and one book.

Mahony received the 2007 Earle F. Zeigler Award from the North American Society for Sport Management (NASSM) for his research contributions to the field. He is a NASSM Research Fellow and served as the association's president from 2003-2004.

Rosalyn Durant has been a fast-rising star in the business of sport and entertainment management, rising in less than 20 years from intern to one of the most powerful people in the industry.

Durant was promoted to senior vice president at ESPN in 2015 and oversees ESPNU, the SEC Network and the Longhorn Network. She is a 1999 graduate of the University of South Carolina with a bachelor’s degree in broadcast journalism and a minor in marketing.

In her previous role, she served as vice president, college sports programming and acquisitions overseeing all of ESPN’s college sports relationships, rights acquisitions and programming, including the inaugural College Football Playoff, NCAA Championships, football, men’s and women’s basketball, and Olympic sports in addition to ESPN’s coverage of high school sports and the management of ESPNU. She was named vice president, programming and acquisitions in 2007, and managed ESPN’s relationships with the NBA, Major League Lacrosse, Major League Soccer, FIFA, UEFA, US Soccer and Olympic sport leagues. Durant played a significant role in the eight-year contract extension with the NBA, which began during the 2008-09 season and included ESPN’s most-comprehensive digital rights package negotiated with any major professional sports league at the time.

Durant is on the executive committee for the Board of Directors of the T. Howard Foundation, a 501(c)(3) non-profit, charitable organization dedicated to increasing diversity in the multimedia and entertainment industry, and is an alumnae of the Foundation’s internship program. She was added to the University of Central Florida’s DeVos Sport Business Management Board of Advisors in 2014 and provides insights and advisement on the school’s sport business curriculum and initiatives. Durant was named to Sports Business Journal’s 40 under 40 list in 2015.

More information on the SEVT conference, including past award winners, is available at sevt.org. 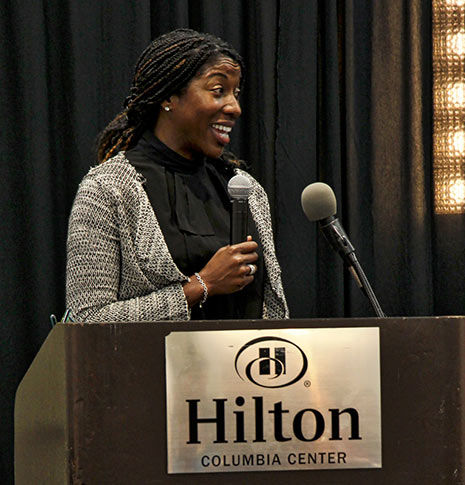 Rosalyn Durant, winner of the Distinguished Alumni in Sport and Entertainment Management Award, has been a fast-rising star in the business of sport and entertainment management, rising in less than 20 years from intern to one of the most powerful people in the industry.