UofSC tennis champ comes up aces in the classroom too

On May 25, Paul Jubb made University of South Carolina history, becoming the first Gamecock to win a national championship in men’s tennis. His drive and passion are apparent both on and off the court, making the retailing major an ace in the classroom too.

Jubb's resume includes countless tennis accomplishments, of course, with more to come. He will play in tennis’ biggest tournament this month after earning a wild card entry to the 2019 Wimbledon Championships at the All England Club. His academic achievements are also impressive.

The rising senior has earned a scholar-athlete award from the Intercollegiate Tennis Association (ITA) and places on the Southeastern Conference academic honor roll and the South Carolina College of Hospitality, Retail and Sport Management Dean’s List.

He says many of the same skills apply to athletics and academics.

“Being a student-athlete has helped me become a more organized person, and helped me learn to manage my time,” Jubb says. “I try to really stay disciplined.”
A successful tennis player must prepare long before stepping onto the court for an important match. Jubb takes the same approach with his classes.

“I do assignments as soon as possible with any free time I have,” he says. “I make every effort not to leave things until the last minute.”

Jubb, a native of Hull, England, says it also helps that he is, as he puts it, “surrounded by good people.”

“I’ve been lucky to have great professors,” he says, mentioning Retailing Instructor Mike Moody in particular. “(Moody) always takes time to wish me luck on match days. Several of them have been really nice and have taken an interest in me.”

Jubb’s success and good attitude as a student and athlete have not gone unnoticed. He received this year’s ITA Carolina Region Arthur Ashe Jr. Leadership and Sportsmanship Award, given in recognition of outstanding scholastic, extracurricular and tennis achievements.

“I’m grateful to be at South Carolina,” Jubb says. His coaches, professors, teammates and friends are equally grateful to have him here.

“Just knowing Jubby and where he's come from and what he brings to the table daily … there are a lot of people in the world who wanted it for him,” says South Carolina Men’s Tennis Head Coach Josh Goffi. “There's not a better kid in the world who deserves something like this to happen to him.” 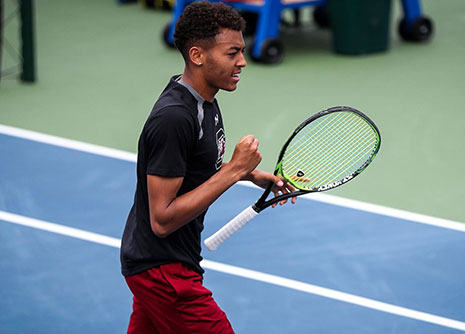 Being a student-athlete has helped me become a more organized person, and helped me learn to manage my time,” Jubb says.  “I try to really stay disciplined."