Faculty and staff at the University of South Carolina have known Florencia Laber was a rising star since she first arrived on campus. The Statler Foundation*, a private foundation that supports students and programs in the hospitality industry, has now confirmed it, awarding the senior hospitality management major its $25,000 Scholarship of Excellence.

Laber is an excellent student, a campus leader involved in many activities and organizations, and has earned internships with Marriott and Disney in her time at South Carolina. However, perhaps the best example of who she is and why she stands out is her answer to the question of “Why hospitality management?”

“It’s just a great feeling to bring happiness to other people, to be a person who’s helping with the most special moments in their lives,” Laber says. “I could make people happy forever.”

A native of the San Francisco Bay Area, Laber set her sights on a career in the hospitality industry while still in high school. She was interested in business but wanted to be in an area of that world where she would enjoy herself and have a chance to make people smile. She visited 20 universities and found kindred spirits at South Carolina.

“Southern hospitality is a real thing. Everyone I met was so willing to help,” she says. “They really showed me that they focus on the individual student at South Carolina.”

I just think our faculty is the best. They all really look out for each of their students. They want you to succeed.

Laber says the wide range of opportunities available at South Carolina also enticed her to come from the West Coast to Columbia, and she has taken full advantage of them. She is a Capstone Scholar and a student ambassador for the university and for the College of Hospitality, Retail and Sport Management. She is also a member of Gamma Phi Beta sorority, active in numerous clubs and organizations, and studied abroad in Italy through a university program.

“There’s a lifetime of opportunities here, not just for college but beyond,” she says. “If there’s one thing I can tell you, it’s 'get involved.' When else are you going to have so many choices?”

Laber was still in Europe when she learned that she had been invited to apply for the Statler Foundation scholarship. Arriving home just a week before the deadline, she hustled to get the required essay written and records of her grades, community service, accomplishments and career goals ready. She submitted it with high hopes, but knew the competition was stiff. Weeks passed and she suspected she had not won, but then the good news came.

“It’s such an immense honor. It’s crazy for me to think I was even nominated,” she says.

Laber flew to Buffalo, New York, home of the Statler Foundation, for the award ceremony in late September, joined by her father and Haemoon Oh, dean of the College of HRSM. She says the award covers all the costs of her senior year at South Carolina, and allows her to focus on her next step: the start of a career in the hospitality industry, possibly beginning with a management role at a hotel or resort.

“I’m impressed with Florencia’s positive attitude and spirit. This award is not surprising given her broad and deep engagement in various extracurricular activities as well as her outstanding academic performance,” says Haemoon Oh, dean of the UofSC College of HRSM. “She has the right mind and thinking for success in this exciting industry.”

Laber returned to Orlando after the ceremony to complete her semester-long internship at a Disney resort, but the memories of the trip to Buffalo and the honor she earned will stay with her.

“I felt so VIP,” she says, and repeats her gratitude to her family, her teachers, and all who helped her along the way. “I just think our faculty is the best. They all really look out for each of their students. They want you to succeed.”

Learn more about the College of HRSM's School of Hotel, Restaurant and Tourism Management.

*The Statler Foundation is a private foundation that supports students and programs in the hospitality industry. It was created in 1934 based on instructions left by hotelier Ellsworth M. Statler in his will. Statler’s widow, Alice Seidler Statler, served as chair of the foundation’s board of trustees for nearly 40 years.

The foundation continues the legacy of the Statlers by awarding more than $1,000,000 each year in grants and scholarships, including funding study abroad opportunities for students who would otherwise never have the chance to explore other cultures. The Scholarship of Excellence program rewards the best and brightest students from all over the United States. 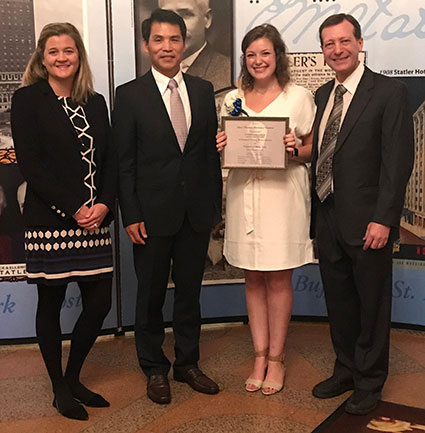 Scholarship Awardee Florencia Laber stands with (from left to right) College of HRSM Director of Development Katye Daley, Dean Haemoon Oh and her father, Edgardo Laber, at the awards ceremony in Buffalo, N.Y.