Lizard’s Thicket has become a South Carolina institution since Anna and Bob Williams founded the restaurant in 1977. While the company has grown from that first Columbia eatery to 15 locations and more than 700 employees, it remains a family business. University of South Carolina students are now part of that family, thanks to The Bob and Anna Tronco Williams Lizard’s Thicket Scholarship Support Fund, established by Anna and Bob’s children to honor their parents and help students succeed.

We just wanted to help some young people who really wanted to make a name for themselves in the hospitality community.

“We just wanted to help some young people who really wanted to make a name for themselves in the hospitality community,” says Bobby Williams, the current Lizard’s Thicket CEO and oldest son of Bob and Anna. “Whatever field they go into, as long as it's tied to hospitality, we really want to further their education.”

South Carolina senior hospitality management major Benjamin Williams (no relation to the Lizard’s Thicket Williams family), is the 2019 recipient of the scholarship. A Columbia native, Williams considered schools all over the Southeast, but says the stature of the hospitality program made staying close to home an easy decision.

“The scholarship has helped me in a huge way,” Benjamin Williams says. “It has helped me reduce the amount of financial aid needed to pursue my college career. Also, it gave me a confidence boost because I saw that the College of Hospitality, Retail and Sport Management had placed their trust in me and believed in me.”

Benjamin Williams is pursuing a career in banquets and special events in the hotel industry. He studied international hotel management on a study abroad trip to the Czech Republic last summer, and has taken advantage of numerous tours and experiential learning opportunities closer to home offered by the College of Hospitality, Retail and Sport Management. Bobby Williams says young people like Benjamin are crucial to the future of the hospitality industry: people who love to serve and want to make it their career.

“These young people are telling us this is what they want their career to be, so we really need to nurture them and keep them on the right track,” Bobby Williams says.

The hospitality industry has a huge impact on South Carolina. In 2017, South Carolina tourism marked a record economic impact of $22.6 billion, an increase of $1.4 billion from 2016, according to new data released at the 2019 Governor’s Conference on Tourism and Travel. Customer experience industries such as retail, sport and entertainment, and hospitality support approximately 500,000 jobs in the Palmetto State and more than 56,000 businesses.

“The sky's the limit in the restaurant industry,” Bobby Williams says. “You can find financial freedom and there are many fields where you can't, especially without a tremendous amount of schooling.”

The hospitality and tourism management program at UofSC is one of the top ten in the nation, and boasts an exceptional faculty, giving students a valuable combination of training in business management, hospitality operations and real-world experience.

“I think the element that has most prepared me for my career is the advice I’ve received from my professors,” Benjamin Williams says. “All of them have a lifetime of experience in a segment of the hospitality industry and having someone who has real-world knowledge to share has helped me hone in on what I would love to do after graduation.”

Lizard’s Thicket and the Williams family are focused on providing a place where families and friends can gather for a hearty meal and catch up on their days. They are moment makers, ready to offer their service to create great experiences for others. They understand as well as anyone the importance of hospitality, and through their generosity, students like Benjamin Williams will keep their legacy alive.

Learn more about the School of Hotel, Restaurant and Tourism Management. 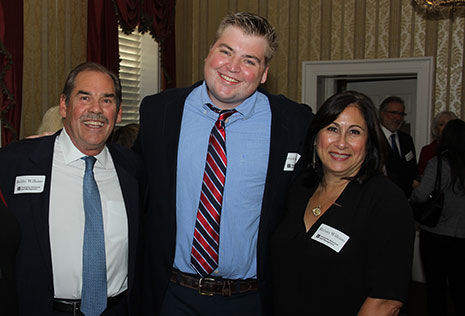