Dashon Murray will graduate from the University of South Carolina in December with a bachelor’s degree in tourism management and a management job with one of the world’s top hotel chains already secured. A lot of hard work went into reaching his graduation and career goals, but the turning point came with one simple conversation.

"One of the biggest things I've taken away from this college is how to network,” Murray says. The Eastover, South Carolina native will head to Seattle in January to begin his new job as a corporate management trainee in finance with Hyatt.

“It’s crazy to think that graduation is almost here and I’m moving to the West Coast and taking the next step in my career,” says Murray. “I’m really proud. My family is really proud.”

Murray joined the South Carolina campus chapter of the National Society of Minorities in Hospitality (NSMH). He attended the organization’s national conference in Chicago during his junior year, and that was when the big moment came.

A Hyatt executive moderating the student activities noticed how Murray took the lead in a group discussion. The two chatted after the event, and Murray’s willingness to put himself forward made all the difference.

“I sent him my resume that night, and had an interview the next day,” Murray says. "I'm not playing games when I meet someone like that. I'm going to network,” he says with a smile. “The recruiters are ready to hire you. They're just looking for ambitious people. If you seem like you're about it, they're going to offer."

The interview led to Murray’s first internship with Hyatt, in Austin, Texas. He impressed the managers there, leading to a second internship last summer in Seattle, and finally to the job offer he accepted for after graduation.

I feel really prepared to graduate. The curriculum and internships have really helped me train for the real world. Learning through experience helps you decide what you really want to do.

"I feel really prepared to graduate. The curriculum and internships have really helped me train for the real world,” Murray says. "Learning through experience helps you decide what you really want to do."

Murray says classes in sustainable tourism, finance and tourism planning helped shape his career goals. While he explored opportunities in sales at first, he now sees himself headed toward a leadership position in tourism planning or economic development.

"I really like looking at patterns, seeing what people are doing and the trends,” he says. “I'm really into data and analytics."

In addition to his participation in NSMH, Murray also volunteered often at College of Hospitality, Retail and Sport Management, which led to becoming a student ambassador for the college. He applied for and won several scholarships while at South Carolina, and pushed himself to make the most out of his campus experience. Finding time for those extra activities wasn’t always easy, but Murray says the most important advice he can offer other students is to find a way.

"Take every opportunity, even if you don't think you have the time,” he says. "Make time for it. Making time has allowed me to pursue the opportunities I've had."

Murray graduates knowing that his degree offers him a wide variety of opportunities. South Carolina’s hospitality and tourism management program is ranked No. 7 in the U.S. and No. 15 worldwide, and Murray says his professors have provided constant support, which he knows will still be there long after his days on campus.

Learn more about the School of Hotel, Restaurant and Tourism Management. 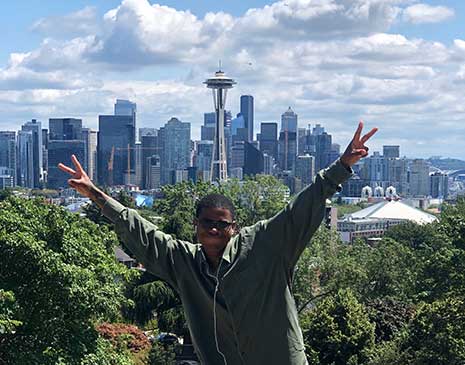 Dashon Murray will soon start a management position with one of the world's top hotel chains, Hyatt, in Seattle, Wash. Murray graduates with a degree in tourism management from the School of Hotel, Restaurant and Tourism Management in December.