The world’s best female golfers came to South Carolina this month as the Country Club of Charleston hosted the 2019 U.S. Women’s Open. It is the first time in more than 50 years that South Carolina has hosted the championship, providing a valuable opportunity for University of South Carolina students and alumni to participate in one of the most prestigious majors in women’s golf.

“Our students have several opportunities to work at men’s major golf tournaments each year, but this is the first time we’ve been able to be a part of a Women’s Championship,” says Jessica Chavis, hospitality management instructor at the University of South Carolina. “Large golf tournaments, in general, have a lot of moving parts and each is managed a bit differently than the other. The Women’s Open gives students the ability to see how the USGA manages a tournament of this magnitude, and to see the rise and excellence of women’s golf.”

Former competitive golfer and 2008 South Carolina Alumna Meredith Taylor was also on site for the major event, working as an analyst for ESPN radio. As a sport and entertainment management graduate and former student athlete for the Gamecock’s Women’s Golf Team, Taylor has a great love and knowledge of the sport and was excited to be a part of the event in her home state.

“The opportunity to commentate for ESPN was unexpected, but really exciting,” says Taylor. “My experience as a player changed the trajectory of my life, and this tournament brings a lot of history and a lot of attention to women’s golf. When you see the best female golfers in the world playing on the most prestigious and historic courses in the country, it means the girls who come behind them can dream of playing on those courses too.”

With a perspective as both an athlete and as a student of sport management, Taylor says she can’t help but wear her College of HRSM “hat” when she goes to a tournament. Everything from the green, to the way the grandstands are set up, to how the merchandise is displayed — all playing a role in the tournament experience.

Much like the current students, Taylor gained industry experience while in school, completing internships at the Gamecock Club and Heritage Foundation. The University of South Carolina’s hospitality management program offers specializations in club management and builds partnerships with golf clubs and organizations across the country to help build talent pipelines where students can learn from the best.

South Carolina alumnus Adam Gartside is the clubhouse manager for Country Club of Charleston and helped lead the recruitment partnership with his alma mater. The club has a rich heritage dating back to the late 1700s when golf first arrived in South Carolina, but hosting the U.S. Women’s Open has marked one of the most significant chapters in the club’s history. As the club prepared to host world-class athletes from more than 29 countries, the focus on excellence in Charleston hospitality was just as important as the club’s pristine Seth Raynor-designed golf course.

“This was our first year partnering with the University of South Carolina’s College of Hospitality, Retail and Sport Management,” says Gartside. “We greatly appreciate all the interns who participated. They were all amazing additions to our team, and I’d like to especially thank Jessica Chavis and Dr. Cathy Gustafson at UofSC for their partnership.”

“South Carolina’s School of Hotel, Restaurant and Tourism Management has strong relationships with many clubs in the nation and Country Club of Charleston is no exception. It was an honor that the Country Club of Charleston recruited our students to work at this prestigious championship,” says Chavis. “They have an excellent management team and we knew that our students would gain a plethora of knowledge by being a part of this event, while also working alongside the USGA tournament operations team.”

On a more personal note, though, the event brings more than just career opportunities.

“Too often people think of golf as a ‘man’s’ sport, but this tournament showcases that golf really is for everyone,” says Chavis. “As a mother of two young girls, I think that it is great that Country Club of Charleston is hosting this tournament in South Carolina. It is an amazing opportunity for young aspiring female golfers to find role models within the industry, and it only strengthens South Carolina’s position as a mecca for golf tourism.” 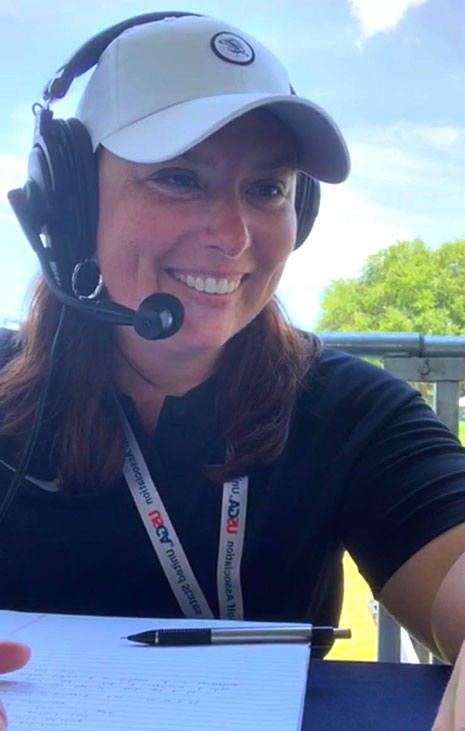 Sport and Entertainment Management Alumna Meredith Taylor was on site at the U.S. Women's Open Championship as a guest commentator for ESPN Radio. Taylor is also a former Gamecocks Women's Golf student athlete.