Kjahna O is still a graduate student, but the Sport and Entertainment management master’s degree candidate has already caught the attention of those at the top of her field.

As a business that exists essentially without competition in its field, the NFL has the luxury of choosing only the very best. When the league prepared to host its annual Women’s Careers in Football Forum in February, executives chose to make the event invitation only. They picked just 40 young women from all over the world for a seat at the prestigious table. O made the list, traveling to Indianapolis for the forum, held during the league’s draft combine.

"Everyone who's anyone in football is at the Combine,” says O. She does not know who brought her to the league’s attention, but she has done plenty to earn it. In her first year in the Master of Sport and Entertainment Management program, recognized as one of the best of its kind in the world, she worked hard both in and out of the classroom. She worked in the operations department for the University of South Carolina football rogram, and volunteered at the Belk College Kickoff, the ACC Championship Game and the Belk Bowl.

"Working for an SEC team is a big deal,” she says. “Now that I've worked with Gamecock football, that's the first thing every interviewer mentions."

The invitation to the NFL forum was also a big deal. The event was created to connect qualified female candidates working in football operations with general managers, head coaches and club executives in the NFL and college football programs.

"Networking is probably the biggest thing going into an industry like the NFL,” O says. "It's a very close knit industry. Everyone knows everyone."

O also realizes that as a woman in a field historically dominated by men, networking could be even more important to her.

"The doors are being opened for women and it's a great time for women to get into sports right now, but that doesn't mean it's going to be as easy as it is for a man,” she says. "I feel like you have to go above and beyond as a woman. People are going to doubt you."

O says the decision to go to graduate school was part of that effort to go above and beyond. She believes learning from faculty members like Danny Morrison and Tom Regan helps set her apart, and she’s enjoying the journey to a bright future ahead.

"They've been so amazing, getting me to where I need to be. I love school."

Learn more about the master's degree in sport and entertainment management. 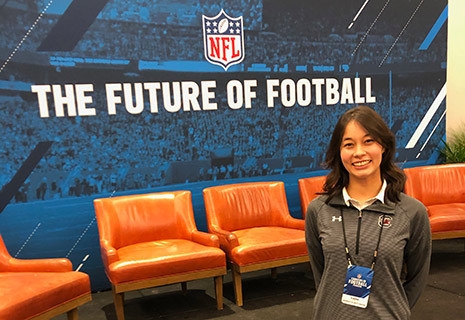 "Networking is probably the biggest thing going into an industry like the NFL. It's a very close knit industry. Everyone knows everyone."