Graduate launches entertainment career as both a manager and artist

Six months ago, Jake Duby was a student and a DJ at Cotton Gin in Columbia’s Five Points. Two months ago, he graduated from the University of South Carolina with a degree in sport and entertainment management. Today, he prepares for the biggest show of his life at one of the biggest festivals in the world, Lollapalooza. Duby is a young man with big goals, and ready to work as hard as it takes to get to them.

Duby has had a love for electronic music for as long as he can remember. So, when he decided he needed a hobby in college, buying a controller (a device used to help DJs mix music) and working on his craft became a valuable use of time. “I never had any aspirations of being a DJ or a producer until I got to college and really fell in love with music,” he says. He started to perform at fraternity parties, Cotton Gin, and at local clubs in his hometown of Lexington, Kentucky.

As his love for music grew and as others took notice of his talents, Duby’s career plans shifted.

“I went to UofSC for the sport and entertainment management program with a plan to pursue a career in sports. However, two years in I noticed a new curiosity and passion while in my entertainment courses,” Duby says. “The department was a breath of fresh air and it shaped my life going forward. Now four years later I’m on the opposite side of where I thought I’d be and have fully submerged myself in the entertainment industry as a performing artist, producer, and venue director, and am loving every minute of it.”

After graduation, Duby moved back to Lexington, Kentucky, and immediately started his career in the entertainment industry as director of promotions at three club venues: The Roxy, Clubhouse (opening late summer) and OnTheRox (opening in the spring of 2022).

“My goal was to use my position working with these entertainment venues to boost my personal artist brand which in turn boosts the venues’ brand if I am associated with them (playing there, running them, etc.). Ideally, I will get to a point where I can hand off the venues to someone capable of running them successfully and I can focus on making music and performing around the nation and world,” he says.

Jake is beginning his goal of performing around the nation starting at Lollapalooza this summer.

Lollapalooza is one of the top music festivals for modern music in the United States. Spread over four days at Grant Park in Chicago, Illinois, the 2021 event is taking place from July 29 through August 1.  After taking a year off due to the Coronavirus pandemic, Lollapalooza is back with headliners like Miley Cyrus, Illenium, Tyler The Creator, Marshmello, Jack Harlow, Post Malone, Journey, and many more.

In addition to his spot on the Lollapalooza lineup, Duby will be playing at the Breakaway Festival over Labor Day weekend and is currently working on new music. His first original track, “Alive”, a collaboration with Landon Ryle, was released July 16 on Spotify and Apple Music. His second original, “Run Into You,” another collaboration with Landon Ryle and Elise Del Mar is set to release on July 23. All of his past mashups, unique edits and creative mixes can be found on his Soundcloud.

When he isn’t playing the festival circuit, Duby will continue managing and playing weekly at his venues in Lexington and hopes to make a visit back to Columbia to play more shows in the city where his career started. “My ultimate goal is to make the most positive impact I can in the entertainment industry no matter if it’s through music or venues,” he says.

Duby’s music is available at jakedubymusic.com and on Spotify, Apple Music and Soundcloud. He also maintains a professional presence on Instagram at @dj.jake.duby. 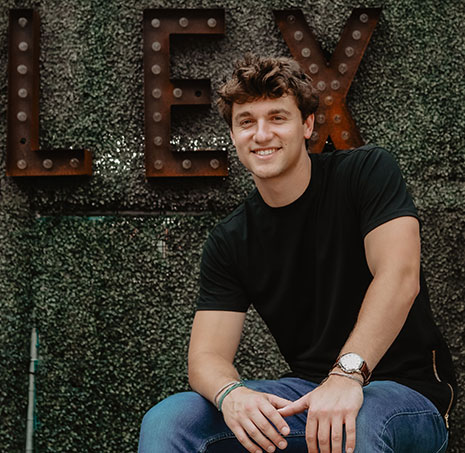 “The department [of sport and entertainment management] was a breath of fresh air and it shaped my life going forward."