Generations of students in the University of South Carolina’s Department of Sport and Entertainment Management will benefit from a new scholarship established by a generous gift from university alumnus Howard “Humpy” Wheeler.

“The department is very appreciative of Mr. Wheeler’s support which will benefit generations of students, and for his lifelong efforts to advance diversity and inclusion in the sport industry.”  says Department of Sport and Entertainment Management Chair Matt Brown.

Wheeler, a 1960 graduate of the university who became famous in NASCAR as an executive and promoter, says diversity has been important to him for decades. He played football at South Carolina in the days of segregation and recognized the injustice even then.

“We've got to understand that the world is diverse,” Wheeler says. “We're all one people.”

Wheeler became one of the leaders in the explosive growth of NASCAR, serving as president and general manager of Charlotte Motor Speedway. Through all his success, he remains a loyal Gamecock. More than 60 years after earning his degree, he continues to look for ways to help his alma mater and its students.

“I've always believed in giving back, and I owe the University of South Carolina. There's so much more that I learned that I could never repay,” he says. “I really like the idea of doing something for minority students.”

Wheeler worked with longtime friend Adonis “Sporty” Jeralds, now the assistant dean of diversity and inclusion at UofSC’s College of Hospitality, Retail and Sport Management, to develop plans for the generous gift.

“He suggested it and I thought it was a great idea, so we did it,” Wheeler says.

“I have always admired Humpy for his compassion and willingness to be a champion for those without the resources to be successful,” Jeralds says. “I have seen firsthand Humpy and his wife Pat provide opportunities for community members who needed a lift. I am excited that Humpy’s gift and his legacy will live on through our students for years to come.” 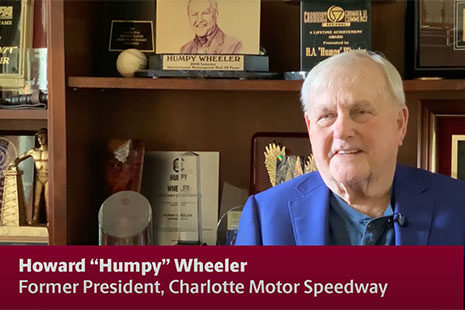 “I've always believed in giving back, and I owe the University of South Carolina. There's so much more that I learned that I could never repay.”
— Howard “Humpy” Wheeler