If working in the world of sports is your goal, the University of South Carolina is the place to be. Super Bowl LVI was the latest example of the opportunities that come with being a Gamecock. While the teams on the field wore blue, gold and orange, behind the scenes was plenty of garnet and black.

Two UofSC College of Hospitality, Retail and Sport Management alumni now work in management roles for the Cincinnati Bengals and three others for the Los Angeles Rams. They are among more than 50 former HRSM students working in the NFL.

They were joined at the Super Bowl by others in less partisan roles. Alumnus Sean Coyle is the guest experience coordinator for SoFi Stadium, the venue which grabbed nearly as much attention as the game itself. Gabriela Beavers, a 2019 grad, is already a Super Bowl veteran, working her third this year as senior coordinator, audience development for the NFL. Alumnus Brandon Ruth is director of operations for the Atlanta Falcons and offered his services to the league’s operations department for the big game.

Fourteen current students also earned the opportunity to work at the Super Bowl. Real-world experience is a hallmark of the top-ranked degree programs at the College of HRSM, and Department of Sport and Entertainment Management Internship Director Steve Taylor works year-round to build and maintain partnerships with industry leaders like event management giant Contemporary Services Corporation. That allows outstanding students like this group of 14 to work the biggest events in sports, gathering invaluable hands-on experience and making contacts that open career doors. HRSM alumnus Demetrius Smalls worked for CSC while a student and this year worked his first Super Bowl as a full-time event manager for the company.

We asked some of the students and alumni who were there to share their thoughts on experiencing one of the biggest events in the world in a way that few people ever will.

"My father and his brother were both college football players. They both tried to make it in the NFL but were cut short. My mother worked in collegiate athletics and missed an opportunity to work in professional sports. To receive the messages I did from my family members saying, ‘you made it to the Super Bowl before any of us did,’ to me meant more than anything. To see the guests' faces light up at the entry made me realize why I chose this industry. I chose sports because there are so many others that have that feeling of ‘I want to make it.’

“To some it just means getting a seat at the Super Bowl, but for me I accomplished the absolute honor of being the hands and feet of the production. I never thought I'd make it to the biggest sporting event in the world, let alone be a part of the show. I'm a girl who was told multiple times that my desire to work in sports was invalid. ‘You can't work in sports you've never played,’ ‘Women don't typically aim so high for the positions you're after,’ ‘As a woman I would see it difficult for you to have a decision-making role in such a male dominated industry.’ So as a woman in sports, I'm tremendously honored to carry the torch for girls who have dreams like mine. I worked hard over there ... I worked like a woman!

“I arrived in Los Angeles nervous of what was to come, but I left there more confident in my abilities than ever. I have a degree from the No. 1 school for sport management, and I made sure that was evident to those in L. A.”

“My favorite part of the day is without a doubt the end of the game. Although one team suffers from defeat, you see the joy from the winning team and all of the people that had a hand in making the Super Bowl come to life. It is a celebration not only for the Super Bowl Champs, but from every person wearing a credential in that building. It is a beautiful sight to see and a blessing to be a part of.”

“The best thing about my job is building relationships and allowing athletes to be the best versions of themselves to achieve their greatest level of success. It may not always be a Lombardi Trophy, but seeing a player you work alongside from training camp to now and accomplish a team or personal goal feels better than any ring.”

“Super Bowl LVI was especially unique to me because the NFL committed to making the big game a part of the greater community, celebrating the culture, people, and beautiful SoFi Stadium. Throughout the week, I had the opportunity to host ownership and C-suite executives while navigating numerous events hosted in Los Angeles.”

“The first half of the game we were stationed at secondary checkpoints, and the second half of the game we were down on the field. We had such a fun time throughout this experience. Los Angeles is absolutely gorgeous, so is SoFi Stadium. We were so lucky to have the chance to network with so many sports industry professionals. We learned so much throughout the week and we couldn’t have had a better time. Thank you so much to the University of South Carolina for sending us on this awesome trip.”

“My home account is the Dallas Cowboys, but we also represent NFL Shop for all onsite retail at NFL events! I was there as a visiting manager to help support the 30 retail locations in SoFi on game day. The Super Bowl has been a career bucket list of mine and I’m so lucky to be able to check it off the list! Proud to be part of the team that led this event to be such a success.”

Less than a week after the Super Bowl, Tull became the latest Gamecock to make the NFL, accepting a year-long internship with the Baltimore Ravens in the team’s ticket sales department.

Read more about the Department of Sport and Entertainment Management here. 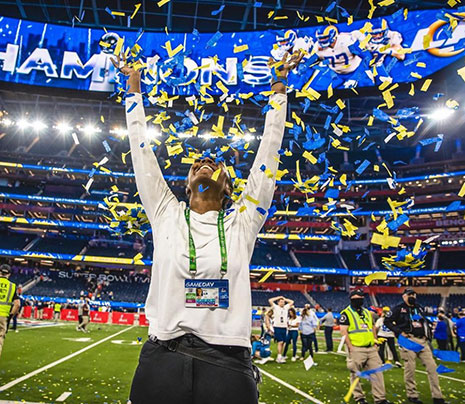 “The best thing about my job is building relationships and allowing athletes to be the best versions of themselves to achieve their greatest level of success."