New Sounds from Down Under and Down South

Dr. Clifford Leaman, is an avid supporter of contemporary music. The associate dean and professor of saxophone at the University of South Carolina believes there are two ways to have a lasting impact on the saxophone community. One is teaching many “fine students to play saxophone who then teach more fine students.” The other is to commission new works for the instrument.

“While the violin goes back hundreds of years, the saxophone was invented around 1838 and only patented in 1846,” says Leaman. “So, we don’t have any original music from the Baroque and Classical periods of music. “We do transcriptions all the time. But saxophonists are heavily invested as a group of musicians worldwide in commissioning new music because of our relatively short history.”

Since 2004, he has collaborated with USC Professor of Percussion Scott Herring to commission and record works for saxophone and percussion — mostly marimba. Leaman has noticed an increase in saxophone percussion duos in recent years.

“Scott and I feel like we have been active enough to move the needle in that part of the repertoire. Both the marimba and saxophone have a somewhat limited repertoire because they’re relatively modern instruments,” says Leaman.

Inspired by the success of saxophone percussion duos and instrument combinations created by peers worldwide, Leaman had the vision to enlist multiple composers to develop a multicultural body of work, especially for two saxophones and two saxophones with piano.

Cliff Leaman has been an incredible champion of my music over many years, so I was both excited and honored when he once again commissioned me for a new work, this time to compose an alto saxophone duo. I’m also thrilled that Cliff has involved some of the finest national and international saxophonists as part of this project.

In early 2022, he received a grant from USC’s Advanced Support for Innovative Research Excellence (ASPIRE) program to commission a cross-cultural exchange between American and Australian composers and record them for a CD. Leaman then reached out to Joseph Lallo, saxophone lecturer at the University of Melbourne, whom he had first met at Strasbourg Conservatory at the 17th World Saxophone Congress when Lallo served as the primary contact for logistical planning. Lallo dated and later married Leaman’s daughter.

Leaman says without the family connection, staying and working in Australia for a month would not have been financially possible and would have made the project impossible to complete.

“The trip was both glorious and miserable. My wife and I finally were able to visit our daughter, who had not been allowed to travel in the last couple of years because of COVID. While we were in Melbourne, though, Joseph and I worked hard every day. The month was not one day too long to complete the project.” says Leaman. 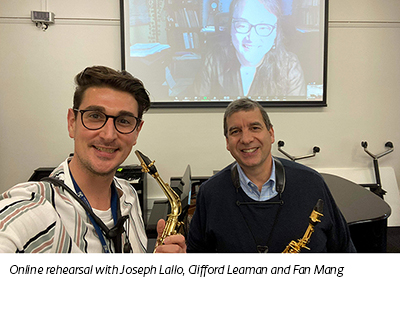 Five composers were selected for the project, including School of Music composition faculty John Fitz Rogers and Mandy Fang.

The completed body of work is tentatively titled “Traces” after Rogers’ new composition of the same name. Both a musical and visual artist, Lallo creates intricate tracing into 2-D works and the intent is to use one of his tracings as the theme and cover art for the CD.

“Cliff Leaman has been an incredible champion of my music over many years, so I was both excited and honored when he once again commissioned me for a new work, this time to compose an alto saxophone duo. I’m also thrilled that Cliff has involved some of the finest national and international saxophonists as part of this project,” says Rogers. “The resulting piece, ‘Traces,’ explores the idea that everything in life is part of an infinite chain of causation, that all things exist because other things exist. This is reflected in interconnected musical ideas across each of the four very different movements.”

With its roots in Chinese folk music, Fang’s “Lily-Colored Jasmine Flowers” brings an element of multiculturalism to the collection. Leaman says the piece incorporates a traditional Chinese melody and surrounds it with a technically intricate and multi-layered contemporary musical language that is unique to Fang’s compositional style.  The piece incorporates many delicate multiphonics and rhythmically free sections, alternating with phrases of the traditional Chinese melody set in varying amounts of consonance and dissonance.

“John and Mandy’s are great pieces that might get played less often because of their difficulty level,” confides Leaman. “Or they may get played more because all the young guns want to come up and play the hardest thing they can find!”

Also selected for the project were two composers based in Australia. Catherine Likhuta’s moving piece “Lullaby for the Innocents” is dedicated to her mother, who tragically passed away early during the recent invasion of Ukraine. “7th Heaven” is contributed by Sydney-based saxophone composer Matthew Orlovich who has written several well-known pieces for saxophone previously.

The fifth new piece is “Three Dances” composed by Braxton Blake of Ann Arbor, Michigan.  Leaman has collaborated with Blake on several past projects and this work incorporates the composer’s contemporary musical language into three traditional dance forms.

Leaman and Lallo agree that a cross-cultural exchange was vital to achieving the overall project quality they sought. However, logistically this exchange has had its pluses and minuses. Usually, new works are not recorded and released before being premiered, but distance and teaching schedules of both professors interfered with the debut of the pieces. They hope to give the world premieres of the works in the coming year, once Leaman and Lallo determine when their schedules align.

“I feel like the project is important to the saxophone repertoire. I think it provides five substantial, quality pieces that musicians can spend a lot of time working on, playing and recording,” says Leaman. “We got everything we wanted — and more.”

About the University of South Carolina School of Music

The University of South Carolina School of Music prepares musicians for professional careers and leadership in music teaching, performance, composition, research and related fields, offering more than 20 degree programs. Along with our focus on music leadership and civic engagement, we provide a perfect balance of high musical standards, a caring environment vested in student success, and career and musical life preparation. Non-music university students can gain meaningful music experiences through courses designed to foster an awareness of the role of music in society.